Facebook Network Operating in Favor of Alliance of Patriots

Since the 2018 presidential election period, ISFED has been monitoring behavior of Facebook pages operating against opposition parties as well as the ruling party. As a result of two large-scale operations carried out by Facebook against Georgian pages, groups and accounts, their ties with the ruling party Georgian Dream and an opposition party United National Movement have been confirmed. As the 2020 parliamentary elections approach, a large-scale campaign in favor of yet another party - the Alliance of Patriots of Georgia has emerged on social media. Notably, in addition to campaigning in favor of the Alliance of Patriots, the network is also engaged in a clearly negative, discrediting activities against the ruling party and especially, against other opposition parties.

Along with a social media page of Obiektivi TV founded by one of the leaders of the party, Irma Inashvili, information campaign in favor of a right-wing conservative, pro-Russian party Alliance of Patriots is also conducted by an online publication, tinp.ge and other groups affiliated with it. 10 discrediting coordinated Facebook pages are also associated with the party, managed by Bakur Svanidze, an activist known for his anti-Western and pro-Russian sentiments. At least 12 genuine and inauthentic accounts take turns to disseminate posts from these pages in Facebook groups.

According to the data analyzed by ISFED through social media analysis software CrowdTangle, number of interactions for pages managed by Bakur Svanidze has reached 600,000 from the day they were founded to August 10, 2020, while videos have over eleven million views.

Names of these pages aim to discredit opposition politicians (with the exception of the Alliance of Patriots members), European Georgia, the United National Movement, the Georgian dream, George Soros, and support of the Alliance of Patriots. The process of creation of these pages began on January 30 and the most recent page was created on March 13. These pages are managed by 5 to 8 administrators, meaning that they are managed in an organized manner, together with Bakur Svanidze. Similar number of administrators may potentially imply that they are managed by the same accounts.

The network of Svanidze’s pages is engaged in active smear campaign against the ruling party, as well as other opposition parties. However, majority of posts concern opposition parties and media. Photos account for the biggest share of posts published by these pages.

The page called “ნამდვილი ოპოზიცია“ [Genuine Opposition] most often engages in an open campaign in favor of the Alliance of Patriots. Notably, since late June, this page and some of the pages from the network initiated a sponsored campaign, which in view of the upcoming elections will likely become even more active in the future.

''Autumn 2020 - Cleaning up the garbage in Georgian politics''

ISFED observation revealed that posts from Bakur Svanidze’s pages are most often and most actively shared in 13 Facebook groups by 12 personal accounts. Notably, majority of these 12 profiles are probably inauthentic and are hiding their identity on Facebook.

Observation of times when posts from Bakur Svanidze’s pages were shared has made it clear that accounts that share these posts are acting in an organized manner and take turns. These profiles share posts in rotation, making it seem that they are working according to a certain schedule. For instance, ‎“Anna Gigauri‎“, ‎“Eka Kvintradze“‎, ‎“Mia-Mia Gvalia“‎ and „Laura Abramia“ share 94% of posts from 07:00 to 17:00. ‎“Reda Kurashvili‎“, ‎“Qeti Otiashvili“‎ and ‎“Polina Tikaradze“‎ mostly share posts from 12:00. In addition, ‎“Anna Gigauri“‎ shares posts only on Tuesdays and Thursdays, while ‎“Eka Kvintradze“ shares posts on Mondays, Wednesdays and Fridays. „Liza Maxarashvili‎“ is active from Monday through Thursday, while „Mariam Gegechkori“‎ and „‎Nini Samitashvili“‎ share posts on Fridays and Saturdays. 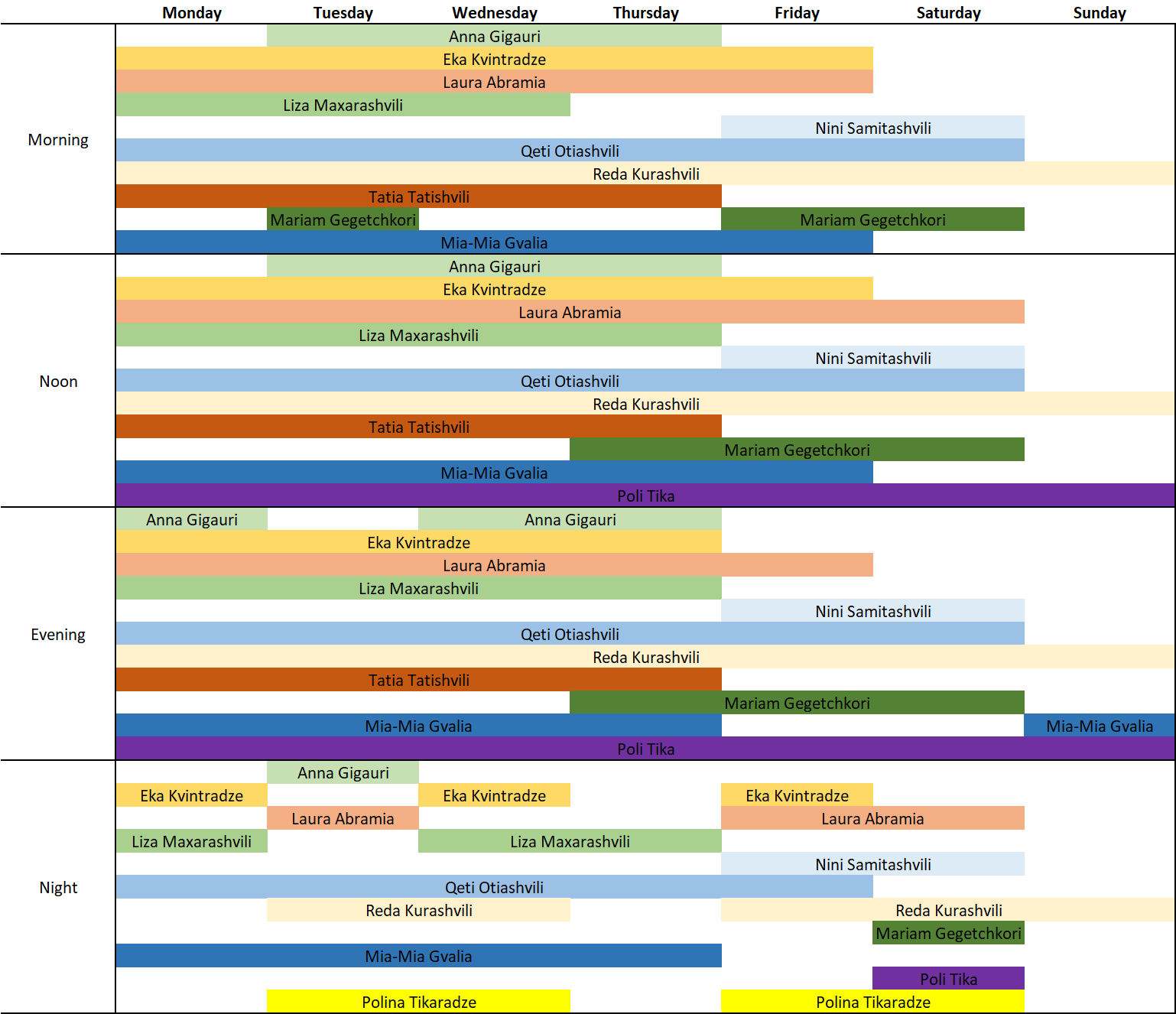 Such distribution of time leaves the impression that dissemination of content of Bakur Svanidze’s pages is an official duty of these accounts and they are working according to a fixed schedule to share posts.

ISFED has found that a party-affiliated online media called „Tinp.ge - დღეს პოლიტიკაში“ which portrays itself as an independent media outlet, in reality operates in favor of the Alliance of Patriots of Georgia. Omar Mdzevashvili is the co-founder and producer of the agency, according to the information made public on his personal Facebook account. Facebook page of the agency was created on July 17, 2019 for the first time, with the name of „Todayinpolitics.ge - დღეს პოლიტიკაში“; however, on November 8, 2019, it was replaced by a new page. Last activity on the old page was on November 1. 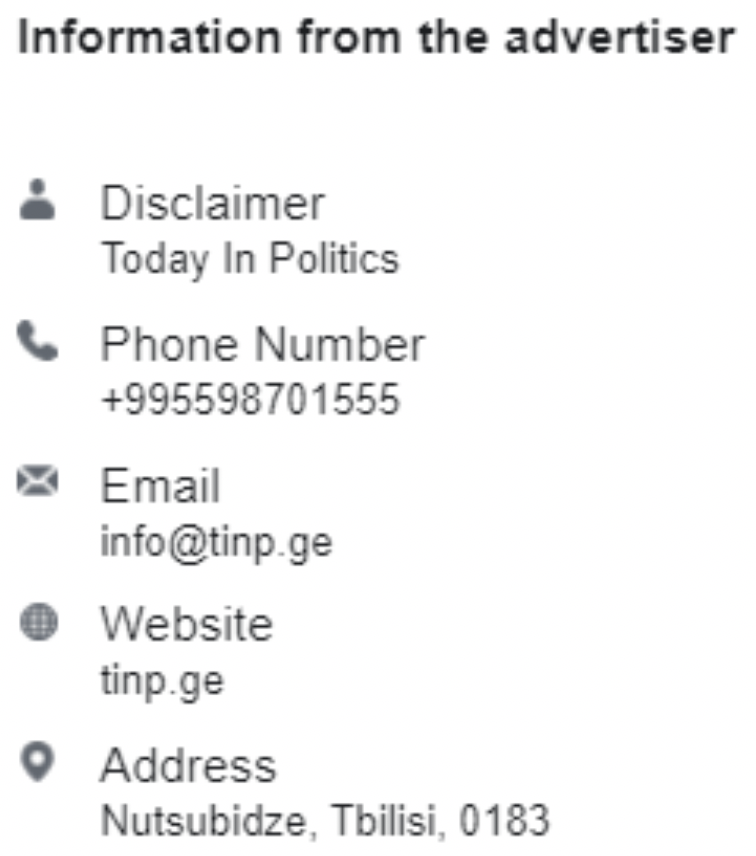 On August 7, 2020, after the Political Ad Library became operational in Georgia, political ads were run on the page „Tinp.ge - დღეს პოლიტიკაში“ with a disclaimer. However, the information declared was insufficient and did not ensure proper transparency. ISFED tried contacted the indicated phone number to verify the authenticity of data and to inquire the missing address information. Person answering the call confirmed to be representative of the agency, however, according to them, the agency does not have an office and thus it was impossible to verify their address.

The agency also uses a YouTube channel, created on July 21, 2019. At this time, the YouTube channel of the agency features video of a speech made by the Alliance of Patriots General Secretary Irma Inashvili during a parliamentary session. The video is titled: “Irma Inashvili in the attack mode. Heavy artillery of patriots against enemies of the state.” 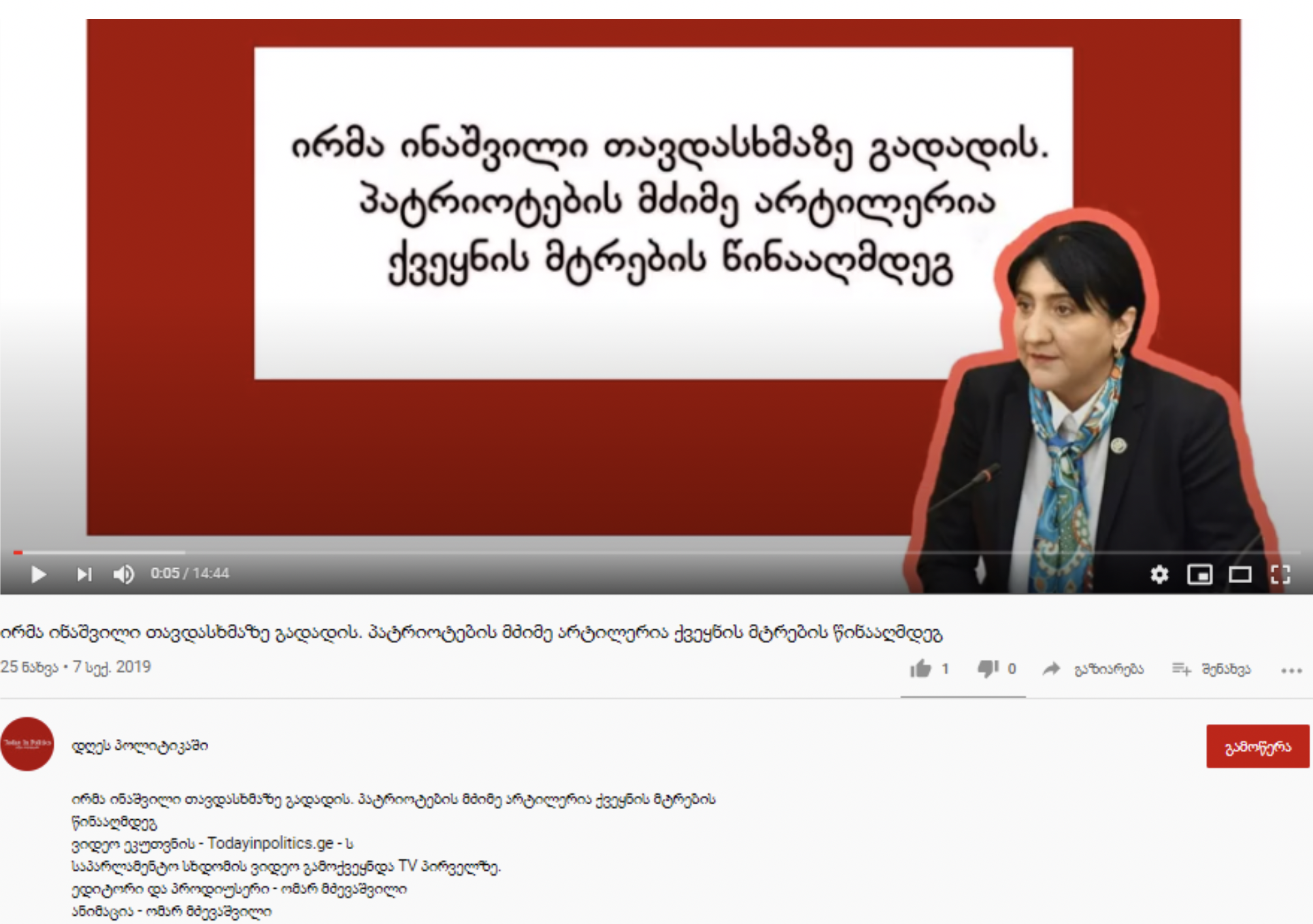 For the purpose of dissemination of content of the agency, there are two groups operating on Facebook under corresponding names: „Today in politics - დღეს პოლიტიკაში“ and „დღეს პოლიტიკაში“ [Today in Politics]. The groups are administered by producer of the agency Omar Mdzevashvili, as well as main producer of a media union Obiketivi, Ilia Chachibaia. Accounts of these individuals also manage a group „ქვეყნის მტრების წინააღმდეგ“ [Against enemies of the state], which are mostly used for the campaign against the United National Movement, the European Georgia and majority of non-parliamentary opposition. In addition to supporters of the Alliance of Patriots, this group also brings together supporters of the ruling party. Posts of pages operating in favor of the Alliance of Patriots of Georgia, as well as the Georgian Dream are shared in the group, therefore, it is engaged in campaigning in favor of the Alliance of Patriots and its leaders, as well as the ruling party and its chairperson, Bidzina Ivanishvili.

Campaign of “Patriots” in Akhalkalaki and Ninotsminda

A Facebook page called „Akhalkalaki News“ has been operating since March 31, 2020. It uses reports of a media union Obiketivi and is mostly engaged in campaigning against majoritarian member of the Georgian Parliament from Akhalkalaki and Ninotsminda electoral district Enzel Mkoyan (Georgian Dream). At the same time, the page is campaigning in favor of a leader of the Alliance of Patriots local organization, Samvel Petrosyan.

Following the 2012 parliamentary elections, Enzel Mkoyan was elected as majoritarian MP of Ninotsminda, and Samvel Petriosian was elected as majoritarian MP of Akhalkalaki. Both MPs used to represent then-ruling party the United National Movement. Later they joined different parties. Enzel Mkoyan was nominated by the Georgian Dream in Ninotsminda and Akhalkalaki unified district for the 2016 parliamentary elections. At the local self-government elections of 2017, Samvel Petrosyan was registered as a mayoral candidate for Akhalkalaki by the Alliance of Patriots. He was the runner-up both in Akhalkalaki and Ninotsminda. Alliance of Patriots also came in second through the party list vote. Competition between Mkoyan and Petrosyan grew into a violent confrontation.

On May 28, a Facebook page called „Akhalkalaki News“ created a public group under the same name, for the purpose of sharing posts published by the page. As of August 10, the group had 1,267 members.

As the election nears, publishing of sponsored posts by pages connected to the Alliance of Patriots is becoming more frequent. It is worth noting that since August 7, after implementing Political Ad Library function in Georgia, ads with proper disclaimers have not run on multiple pages of Bakur Svanidze network. Nearly all ads run by these pages serve electoral campaign. Therefore, all of these ads should bear a necessary disclaimer about the advertiser as required by Facebook. As for the amount spent for sponsoring posts, as well as most of activities of social media pages managed by Bakur Svanidze should be considered as electoral expenditure, according to the Georgian legislation, and become subject of financial monitoring by the State Audit Office.

The report is prepared based on openly available sources on Facebook. Assessment of the personal accounts (profiles) stems from their public activity only. CrowdTangle, a social media analytics tool owned by Facebook, was used as a monitoring tool.

ISFED’s social media monitoring program is carried out with the generous support from the American people through financial assistance from the United States Agency for International Development (USAID), East-West Management Institute’s (EWMI) ACCESS Project, and through funding from Open Society Georgia Foundation (OSGF). Content of this report is the sole responsibility of the International Society for Fair Elections and Democracy and may not necessarily reflect the views of the donor organizations.