Persons associated with News-Front agency resort to different means to implement Kremlin’s information policy. While the agency has been banned by Facebook, it has been trying to disseminate information materials on social media by disguising the web-page name or by creating other online media platforms. Individuals behind News-Front are using such means to diversify information materials or evade bans imposed by social media platforms.

Former administrator of News-Front’s Facebook page, Konstantine Chikviladze is currently administrating at least two closed Facebook groups and in addition to inauthentic accounts he is also using two different media outlets to disseminate pro-Russian and anti-Western messages. These are the following agencies: Georgia-news.info (Newsfront) and www.spnews.io. Unlike News-Front, “Spacesnews • სივრცეები” creates Georgian social/political information materials, however anti-Western attitudes are apparent in its articles. These articles are disseminated by fake accounts in groups with thousands of members and they are accompanied by clearly anti-Western and pro-Russian messages.

After Facebook removed the network of a pro-Kremlin agency News-Front on April 30, 2020, its administrators began to disseminate materials using a new domain - Georgie.su. On October 10, 2020, sharing of News-Front material began in Georgia through a web-page https://georgie.su/ with domain registration documents specifying ruvesnainfoblog@yandex.ru as a contact e-mail, which is possibly associated with a Pro-Kremlin publication Russkaya Vesna (Russian spring). Headlines on the web-page provided a link to News-Front’s web-page interface, while the domain ending „SU“ stands for the Soviet Unit. Web-pages under this particular domain are used by the Russian intelligence Service for hacking and propaganda. Notably, Russkaya Vesna permanently disseminates Kremlin propaganda for former Soviet Union republics and it is known for especially supporting Vladimir Putin. Russian Vesna has been created under Konstantin Rykov’s patronage, who is a member of Kremlin’s Internet-propaganda team.

Domain https://georgie.su/ is no longer available, however News-Front materials continue to be disseminated in a disguised manner from a new web-page Georgia-news.info. This method is called „domain cloaking“, which allows hiding the true destination of a link and presenting actual contents of a website  and presentingthe original site’s content in a frame on another domain.  This method is commonly used for evading bansimposed by social media platforms while keeping the links posted on the platform intact. News-front is not new to using such methods. Immediately after the Pro-Kremlin publication was blocked on Facebook, two websites with different names appeared, which automatically transferred users to English and French-language version of News-Front.[1]

Notably, in July 2019, an online publication called “Spacesnews • სივრცეები” was discovered in Georgia, which began sponsoring Facebook posts on September 19, 2020, and it has published over 310 sponsored posts. ‘”Spacesnews” is a relatively new information source on social media. In addition to articles with a neutral tone, it also disseminates anti-Western, pro-Russian messages in a disguised manner and aims to influence public opinion in Georgia. Materials of this agency are disseminated on social media in a coordinated manner by inauthentic accounts.

Notably, a political talk-show called „Mtavari Sivrtse“ [Main Space] was most frequently aired on ''Spacesnews • სივრცეები''. The program was aired on Facebook daily at 21:00, beginning from October 2020. One of its hosts is Giorgi Mdivani, administrator of  “Politicano • პოლიტიკანო” - a Facebook page that disseminates anti-Western and Eurosceptic messages. He also has his own program on the channel, called Politepidemic.

“Spacesnews” is registered as Sivrtseebi Ltd. [Spaces] and 100% of its shares are owned by Tamar Jojua, who is also a director of Sivrtseebi Ltd. He is a wife of the founder of a company Badagoni, Giorgi Salakaia.

Observation of open sources has revealed suspicious ties between the two publications, News-Front and Spacesnews. More specifically, certain inauthentic accounts disseminate mostly News-Front and ‘’Spacesnews • სივრცეები’’ materials in public groups with thousands of members. Former administrators of News-Front, Konstantine Chikviladze is among those who disseminate such materials. 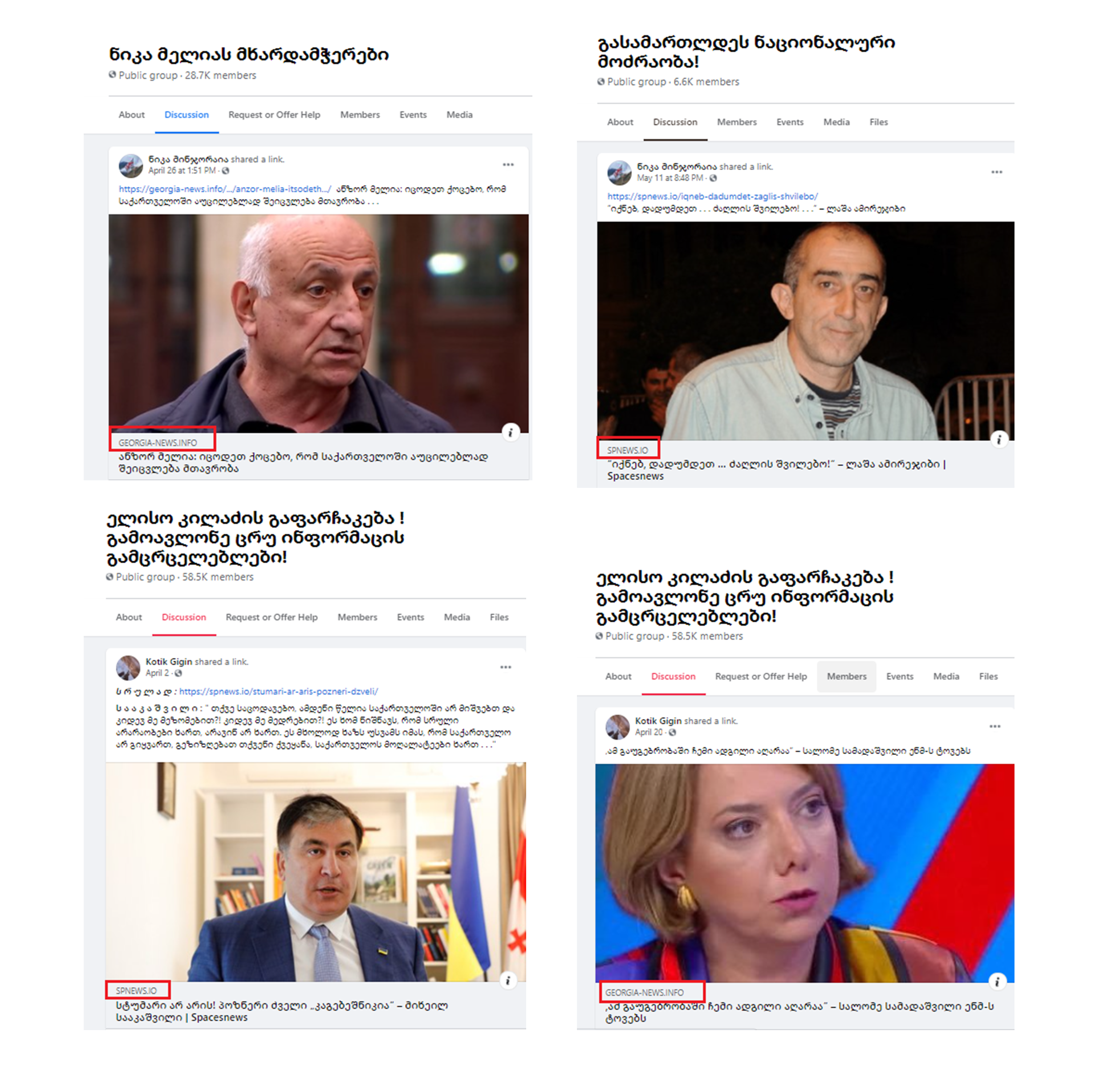 Sharing of "Spacesnews • სივრცეების" materials by inauthentic accounts in groups

Inauthentic accounts that disseminate “Spacesnews” and signs of a coordinated behavior

The monitoring has revealed that the network identified by ISFED brings together 12 inauthentic accounts which share “Spacenews’s” materials with over 590,000 individuals through 28 groups. For majority of these accounts, ‘about’ section is empty, they don’t provide any identifying information and unlike ordinary Facebook users, there are no comments of other people under their photos. Due to low image quality, some of them could not be verified, however it has been established that they are using someone else’s identity. Many photos identical to Nini Grigolashvili’s profile picture can be found on the Internet, including one posted by Ксения Рудковская [Ksenya Rudosvkaya]. Tamar Gelovani is using photos of Натия Кисиева [Natia Kisieva]. In many cases, Facebook page URL is also different. For example, an account called „Nana Lisa“ has londa.jiki in the URL, while Dursum Machutadze has bondo.metreveli, which leads us to believe that the names have been changed.

The fact that these accounts share identical material, use similar language and like similar pages, suggests that they are connected. This leads us to believe that the same person may be behind these accounts. 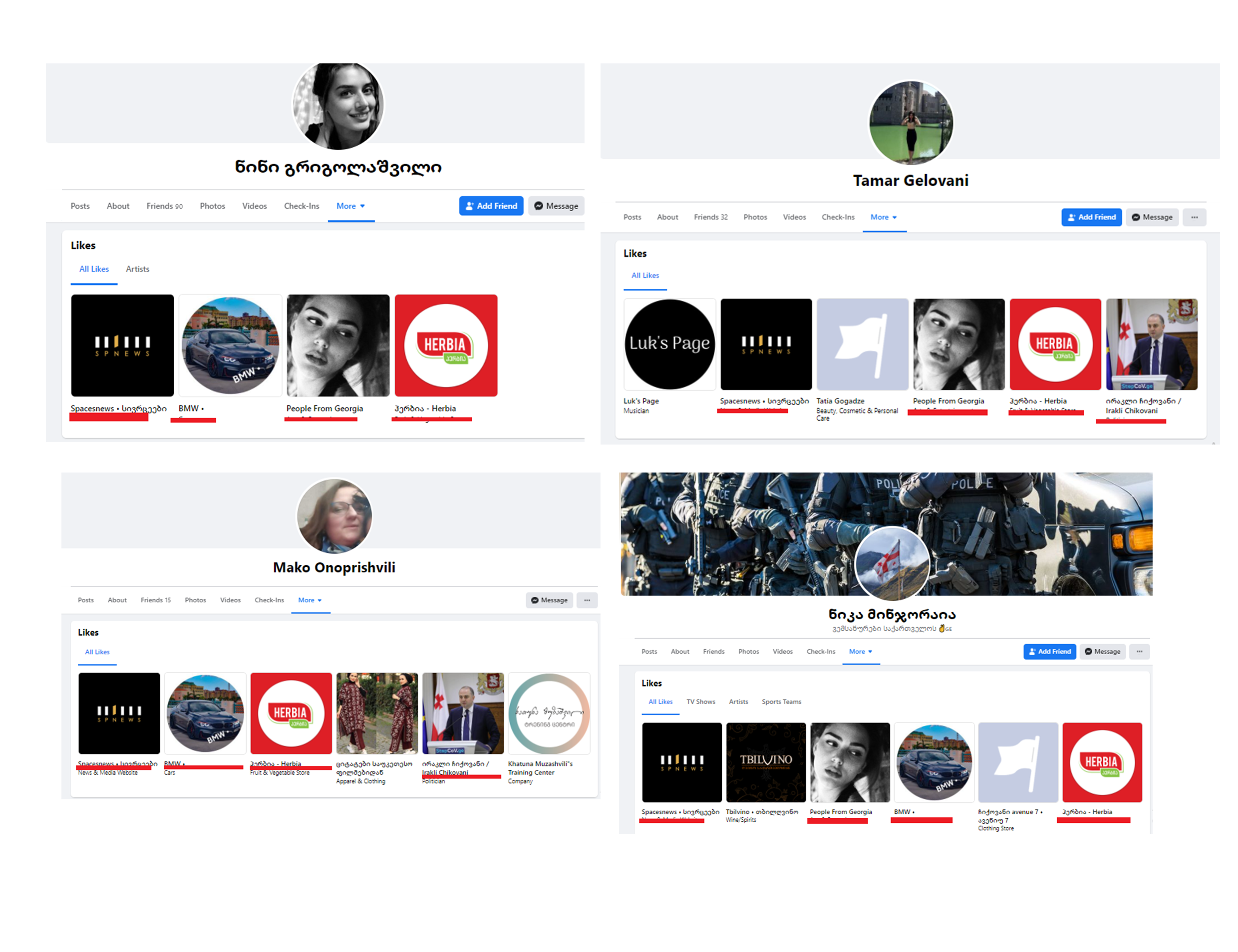 Some accounts are friends with each other and they actively like each other’s photos. A few of them are advertising products of a Georgian herbs company “Herbia”. 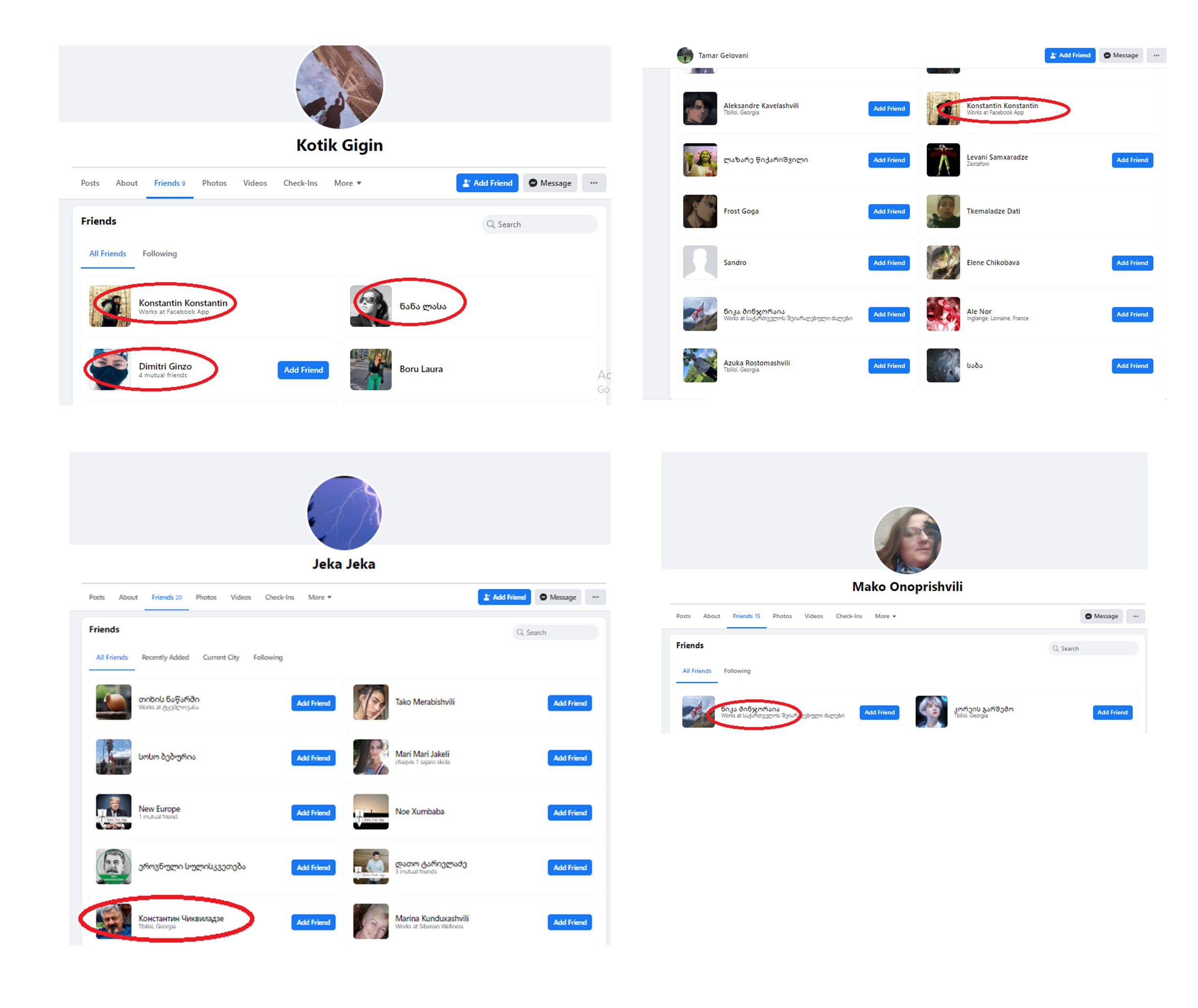 ‘’Spacesnews’’ and associated inauthentic accounts disseminate materials in at least 28 Facebook groups. Their audience is quite diversified, while topics that these groups focus on can be classified the following way:

Such distribution and tactics largely coincide with the strategy of News-Front network discovered by ISFED. Similar to this network, groups associated with “Spacenews” were targeting specific groups to actively disseminate news and main messages, according to group discussion topics. In many cases, users shared links not from the original source but from persons involved in the inauthentic account, which leads us to believe that in addition to fake accounts, other individuals may also be involved in the viral spread of information and their actions may be coordinated.

Observation of the materials shared suggests that on the most part, members of the network shared articles created with the aim of discrediting the opposition and strengthening anti-Western, pro-Russian sentiments and Stalin cult. 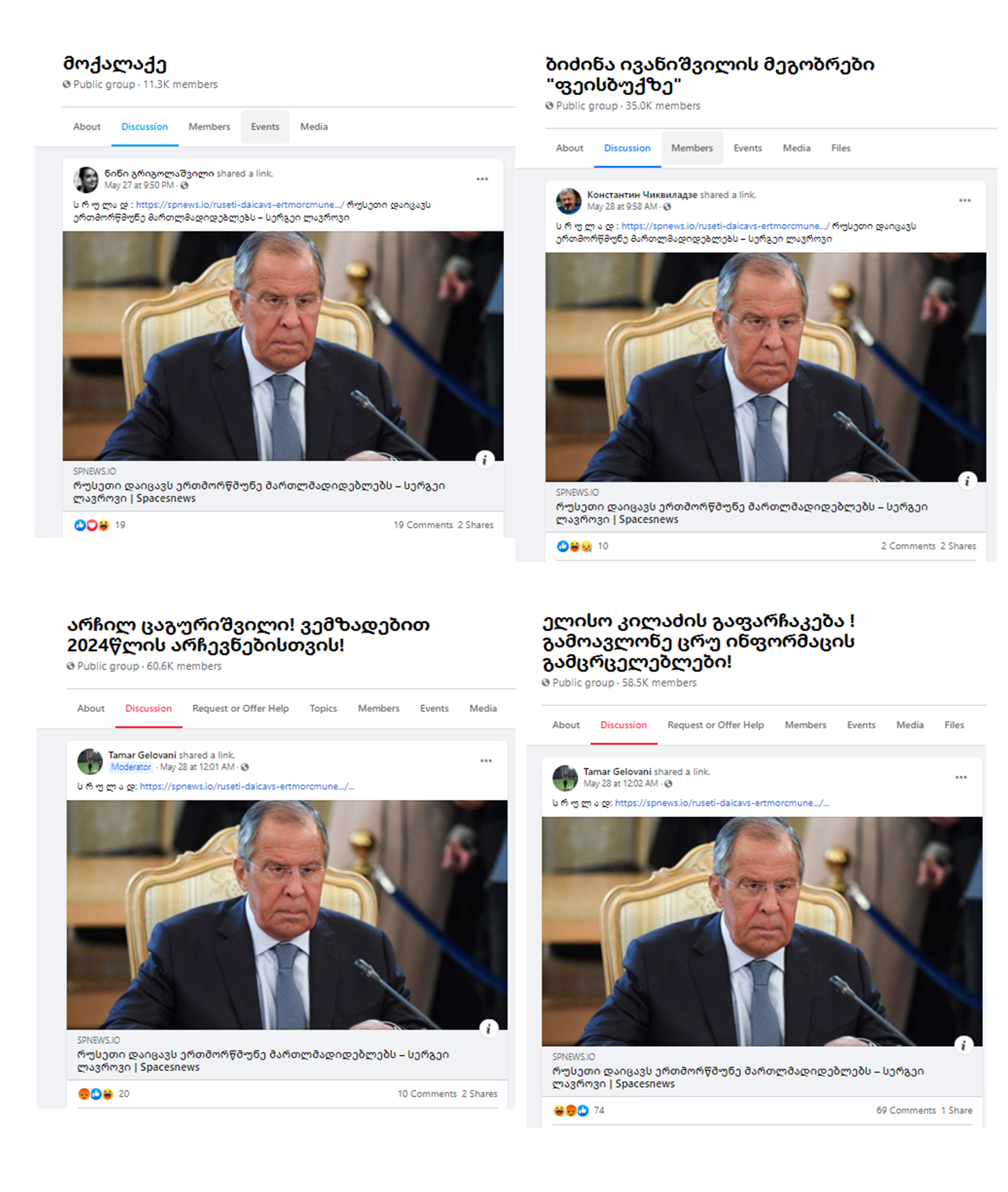 Group: Archil Tsagurishvili! We are getting ready for the 2024 elections!; Tamar Gelovani: Russia will protect Orthodox adherents that share the same faith [as Russia]

Suspicious tactics have also been found in the behavior of inauthentic accounts, possibly aiming to radicalize the society. For example, with regard to Nika Melia’s imprisonment, members of the “Spacenews” network, depending on the group’s discussion topics, shared posts with captions that either expressed positive emotions or encouraged aggression toward him. By doing so, they were trying to stage a confrontation between two camps of the society with different political opinions.

A pro-Russian organization „Eurasian Institute“ founded a club of young political scientists in 2013. One of the members of its council is Giorgi Mdivani.  According to a study published by IDFI, their representatives were actively involved in the “International Forum for the Victorious“ in Russia in 2015, dedicated to 70 years of victory in the Great Patriotic War. In a number of instances, Mdivani has been referred to as a founder of the club, however his name is also provided in the sponsored posts of a Facebook page with Eurosceptic and anti-Western content - Politicano • პოლიტიკანო.

The page was created on November 3, 2014, and since then it has been actively trying to stir up skepticism toward Georgia’s pro-Western future and romanticize Soviet past. Giorgi Mdivani hosts a weekly analytical program „Politepidemic“ and a talk-show „Main Spaces“ on “Spacesnews • სივრცეების”. In the program he provides an overview of ongoing political and economic processes, including: Ukraine local self-government elections, protests in Belarus, technologies for preparing a color revolution, digital censorship, etc. However, notably during these programs previous authorities are actively discredited, anti-liberal sentiments are stirred up and Soviet past is romanticized. Ukraine is viewed as headquarters for preparing destabilization in Georgia, developments in Belarus are viewed as an attempt of a bourgeois coup, while Georgia is viewed as an example of revolution failure. The page “Spacesnews • სივრცეები” also disseminates pro-governmental materials and messages against part of the opposition and critical media.

Vaka Gorgiladze is a host of another Spacenews program – „Laboratory z“. Notably, through June 1, 2021, Vaka Gorgiladze was also hosting a program „Imedi’s Factor“ on Imedi TV, while a Facebook page associated with his wife, Eka Sakandelidze –  ‘’მარკეტინგული ცენტრი ტერრა მედიას’’ [Marketing Center Terra Media] is among pages that actively disseminate Spacenews materials. Pages that share Spacenews materials include: “საქართველო და მსოფლიო” [Georgia and the World], “სამოქალაქო საზოგადოება - XXI. civil society” and “RESTORnews TV”. The first one is associated with the Eurasia Institute, newspaper „Georgia and the World“ has been created by their partner non-commercial (non-profit) legal person „Historic Heritage“. As to RESTORnews TV, contact number specified on the page belongs to Irakli Khoteveli. He is the host of a program called „Molotoff’s Cocktail“ on “Spacesnews • სივრცეები’’.

Monitoring of the inauthentic network of a Russian news agency News-Front and its affiliate “Spacesnews • სივრცეები” – an agency registered in Georgia has revealed attempts to influence voters in their organized activity. Methods used match characteristics of inauthentic activity of News-Front until 2020, earlier revealed by ISFED. The inauthentic accounts intentionally disseminated Euroscepticism, anti-Western narratives in general and pro-Russian sentiments. Information operation carried out through an organized behavior aimed to turn Georgian Facebook users against each other and incite nihilism. The present findings suggest that Pro-Kremlin agency News-Front and its affiliates continue to operate in Georgia and in light of the afore-described scheme, they continue to be a security threat for Georgia.