In addition to invading Ukraine and unleashing war, Russia is also waging an active information war on social media. Pro-Russian propaganda activity is observed in Georgia as well, especially on Telegram, which is used to spread the news about the war every minute. After Georgia's most popular social media platform, Facebook, shut down radical and violent groups as part of its crackdown on disinformation and information manipulation, these very same actors have become increasingly active on Telegram and Tik-Tok which in a way has become their alternative[1]. Radical groups first used Telegram to organize violent protests on July 2-5, 2021, and actively called on supporters to join to their Telegram channels. Based on ISFED’s observation, in parallel with the war waged by Russia, Georgian-language channels operating on Telegram broadcasted pro-Russian, anti-Western and anti-Ukrainian messages. Some of the active channels are connected to Alt-Info.

ISFED observed the tactics and messages used by pro-Russian actors on Telegram. The report analyzes the main messages of the channels during the second half of March and April, in parallel with the Russia-Ukraine war. 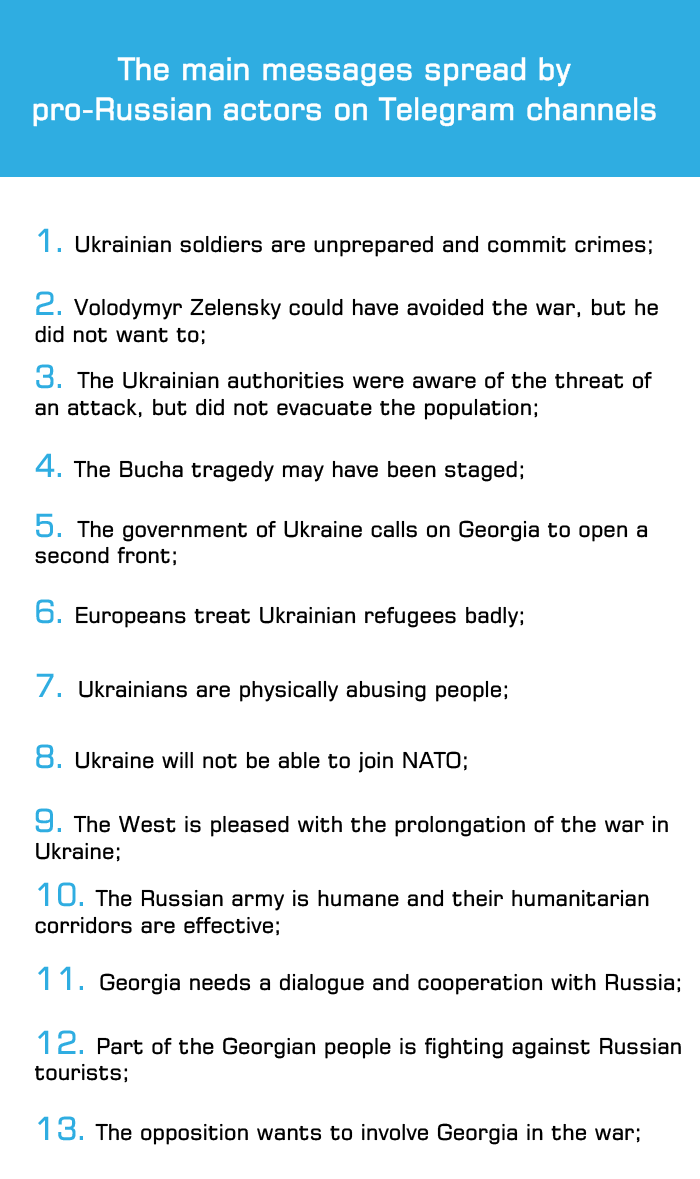 According to ISFED, 9 channels are active on Telegram regarding the war waged by Russia in Ukraine [cf. Appendix N1]. The total number of their followers is 39,835, of which about 81% come from two Alt-Info channels - Alt-Info • ალტ-ინფო and Alt-Info News. „TV-კონსერვატორი“  (TV Conservator) is an openly affiliated channel with Alt-Info, while „მსოფლიო პოლიტიკა“ (World Politics) has spread positive messages about Alt-Info. On the main page of the pro-Russian group a non-standard tendency to increase the number of subscribers was noticed, which may indicate an attempt to artificially attract subscribers and create artificially high interaction. In particular, on May 9, 2022, Alt-Info News gained 14,712 followers in one day, while the increase in followers on other days of the same month was mostly 0. Alt-Info gained 4,352 subscribers on May 5 and 3,830 subscribers on May 6, compared to other days which peaked at 22 new subscribers. Also, on the "Alt-Info" channel on May 5, subscriber gain was increased hourly, for example, at 2 and 3 o'clock at night, and the activity during other hours was small or non-existent. 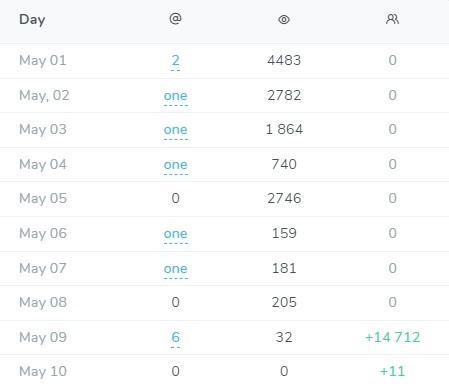 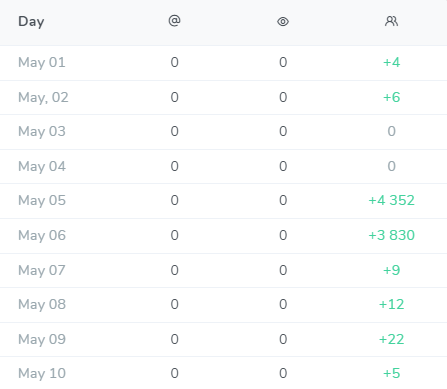 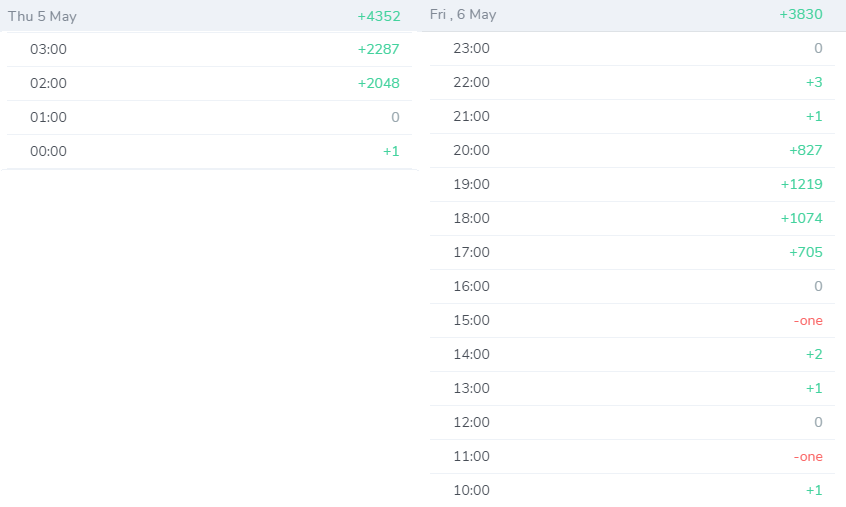 *The hourly increase of subscribers on the channel "Alt-Info • ალტ-ინფო" on May 5 and 6. Source: Tgstat.com.

Along with them, the channel "BeqaNews" run by the ultra-right activist Beka Vardosanidze and the channel "Society for the Protection of Children's Rights" related to Alexander Palavandishvili are operating on Telegram.

It should be noted that according to the monitoring tool, the channels are interconnected. Separate channels refer to each other in posts or share each other's posts [cf. Appendix N2]. 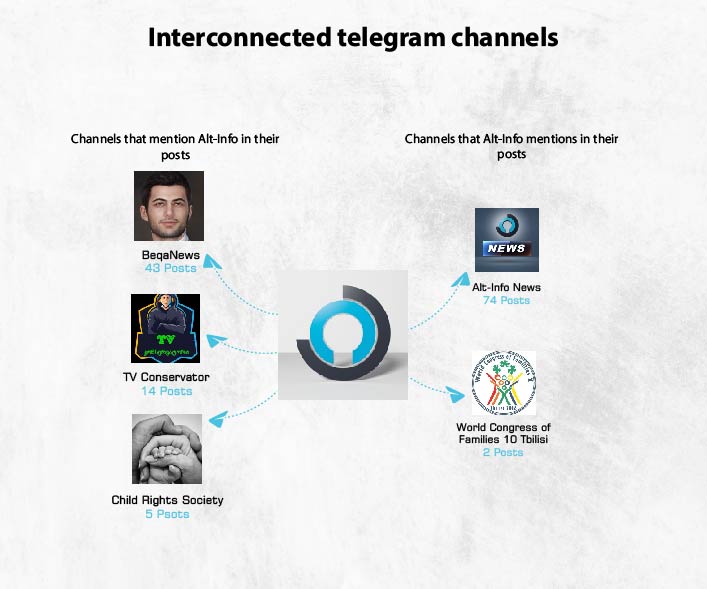 Alt-Info and Beka Vardosanidze's Telegram channels accused Ukrainian soldiers of violence. Among them were allegations of Ukrainian Defense Forces raiding a church and kidnapping a priest, raping women, torturing Russian servicemen and shooting civilians. Particular attention is paid to the Azov Battalion, which is accused of opening fire on civilians and insulting the families of fallen Russian soldiers. 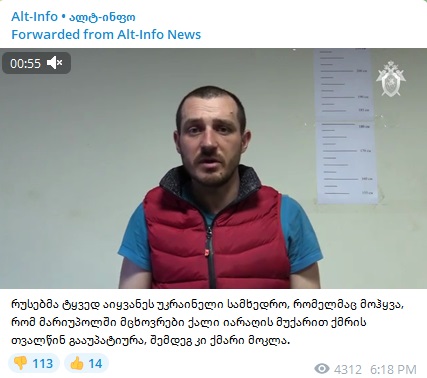 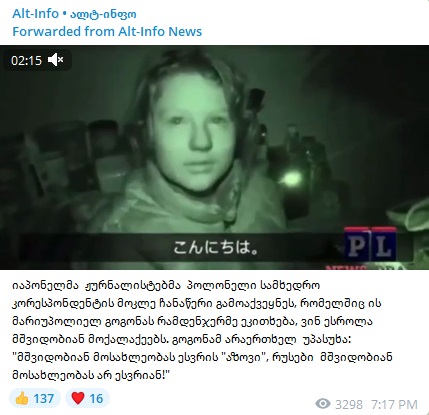 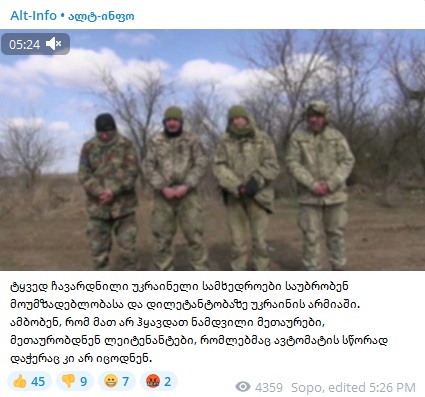 Image 1 - TheRussians captured a Ukrainian soldier which told how he raped a woman in Mariupol at gunpoint in front of her husband and then proceeded to kill the husband;

Image 3 - Captive Ukrainian soldiers speak of unpreparedness and dilettantism in the Ukrainian army. They said that they didn’t have any real commanders, they were commanded by lieutenants who didn’t even know how to hold a machine gun properly.

Telegram channels related to Alt-Info sought to portray the Ukrainian army as unprepared and to cover reports of the capture, defeat, or destruction of Ukrainian military units. 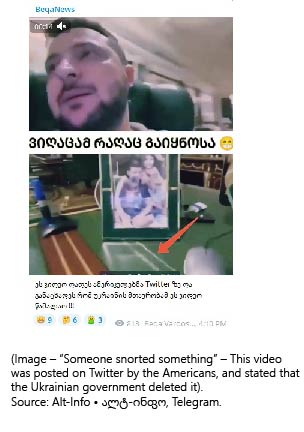 Posts against the Ukrainian government, including those of Volodymyr Zelensky, were found on Telegram channels. On April 3, BeqaNews published an article written by kvira.ge accusing Zelensky of having the option to avoid a war with the Russian Federation, but refusing to do so. An article on the Alt-Info channel TV Conservator was published in which Zelensky was presented as one of the main obstacles to achieving peace. Beka Vardosanidze also spread a falsified propaganda video on Telegram, in which Zelenski is accused of drug use. According to the Myth Detector, cocaine and a bank card were digitally added to the video of Zelensky and Musk talking.

Alt-Info was spreading discrediting messages on their Telegram channels, that were aimed at the Ukrainian government. In particular, the authorities were accused of knowing in advance about the threat of an attack, however they did not evacuate the population.    Source: „BeqaNews“, Telegram.

The Telegram channels BeqaNews, TV Conservator and Alt-Info News sought to question the Bucha tragedy and reported that Western leaders were questioning the credibility of the Ukrainian version of what had happened. Beka Vardosanidze wrote on his Telegram channel that the Ukrainian government calls on Georgia to open a second front. 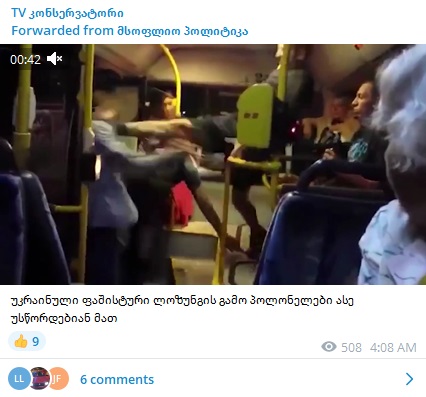 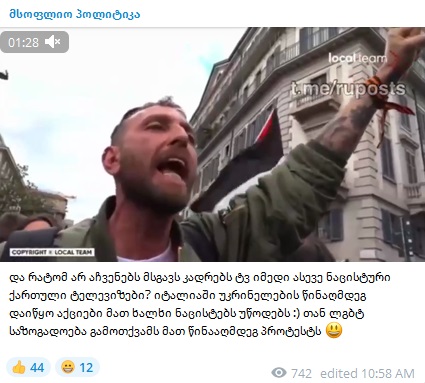 Telegram channels broadcast anti-NATO, anti-US and Eurosceptic messages. Alt-Info reported that Ukraine's membership in NATO is not on the Alliance's agenda and NATO is not ready to ensure Ukraine's security. In addition, the Telegram channels „️სინათლის ძალა / Power Of Light, "ბავშვთა უფლებების დაცვის საზოგადოება” (Child Rights Protection Society) and BeqaNews have suggested that the West and the United States have a interest in prolonging the Ukraine war, which is why they are supplying weapons to Ukraine, although they do not intend to take part.

( Image – Don’t you question why Zelenski is given weapons that will only prolong the war? Why aren’t they giving him airplanes and tanks? Which will genuinely  tip the scales in favor of Ukraine?).

In parallel with the Anti-Western and Ukrainian messages, pro-Russian messages and news were also spread on Telegram channels. Alt-Info provided users of the Telegram channel with information about the humanitarian corridors organized by the Russian side and their effectiveness. In addition, posts were published aimed at demonstrating the superiority of the Russian army. The Telegram channels also aimed to portray the actions of the Russian army in a humane way. For example, "ბავშვთა უფლებების დაცვის საზოგადოება” (Child Rights Protection Society ) reported that casualties among the civilian population in Ukraine were accidental and that Russia was deliberately bombing only military and industrial facilities. 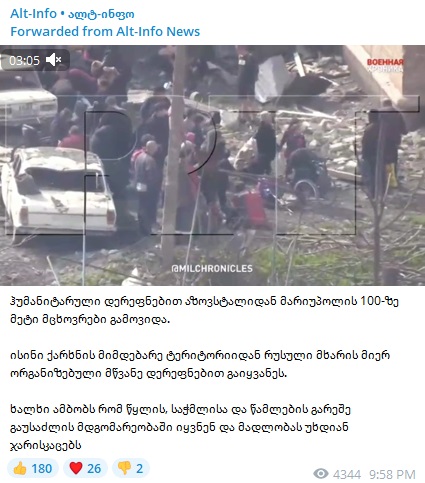 (Image – Over 100 Mariupol civilians escaped through the Azovstal humanitarian corridor. They were escorted from the surroundings of the factory through the green corridor organized by the Russian side. The people said that they were struggling without food, water and medicine and thanked the Russian military­). Source: „Alt-Info • ალტ-ინფო“, Telegram

Part of the channels also spoke about the importance for dialogue and cooperation with Russia. A post was published on "ბავშვთა უფლებების დაცვის საზოგადოება” (Child Rights Protection Society ) about the threat of Tskhinvali joining Russia and entering into negotiations with them. The post said that if Russia sees that strengthening Georgia is a precondition for their weakening, Georgia may lose its statehood and the nation may be destroyed. 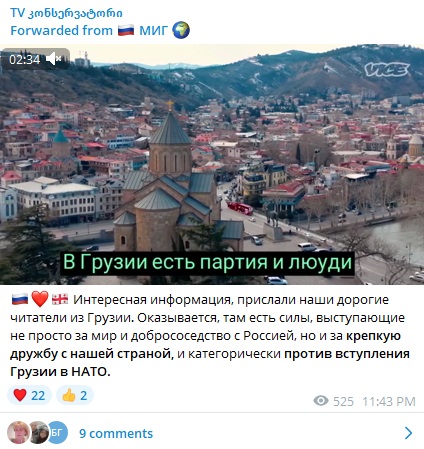 "მსოფლიო პოლიტიკა” (World Politics) wrote about the improvement of Russia-Georgia economic relations and the opening of visa-free travel.

„TV კონსერვატორი“ (TV Conservator) published a story about Alt-Info shared by the Russian channel RU МИГ. The post said that as it turned out, there are forces in Georgia that not only support peaceful relations and good neighborliness with Russia, but also categorically oppose Georgia's accession to NATO.

Also, a post was published on the „თავისუფალი არხი“ (Free Channel) accusing the Georgian people of fighting against Russian tourists.The channel was also sharing information about “McDonald’s” reopening in Russia. 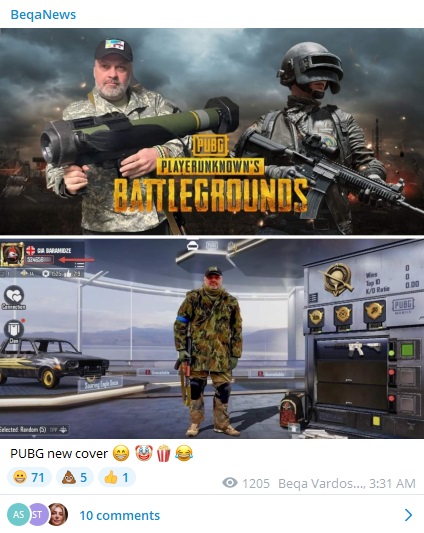 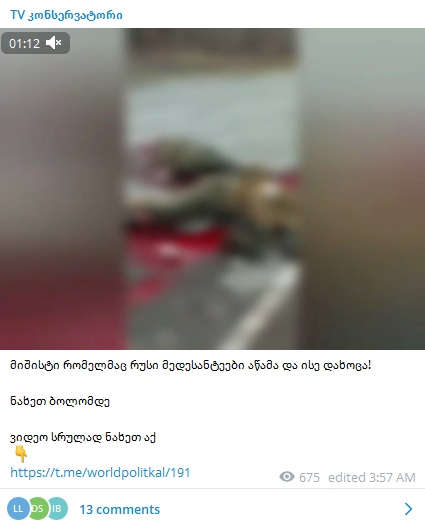 (Image 2 – “A Saakashvili supporter who tortured and killed a Russian paratrooper, watch until the end, you can view the full video here – Link)

Alt-Info and its affiliated groups, as well as other pro-Russian actors, are spreading anti-Western, pro-Russian and anti-Ukrainian messages in an attempt to intensify polarization of values in society.

With the strengthening of pro-Russian actors on Telegram in Georgia, the problem of transparency remains one of the main challenges in conducting an observation. Existing monitoring tools are less effective in finding and detecting new channels. Also, there’s the challenge of artificially gained followers on Alt-Info channels.

With that in mind, it is important to analyze the scale and consequences of the actions of pro-Russian actors on the telegram as part of Russia's information operation in Georgia in the context of state security. 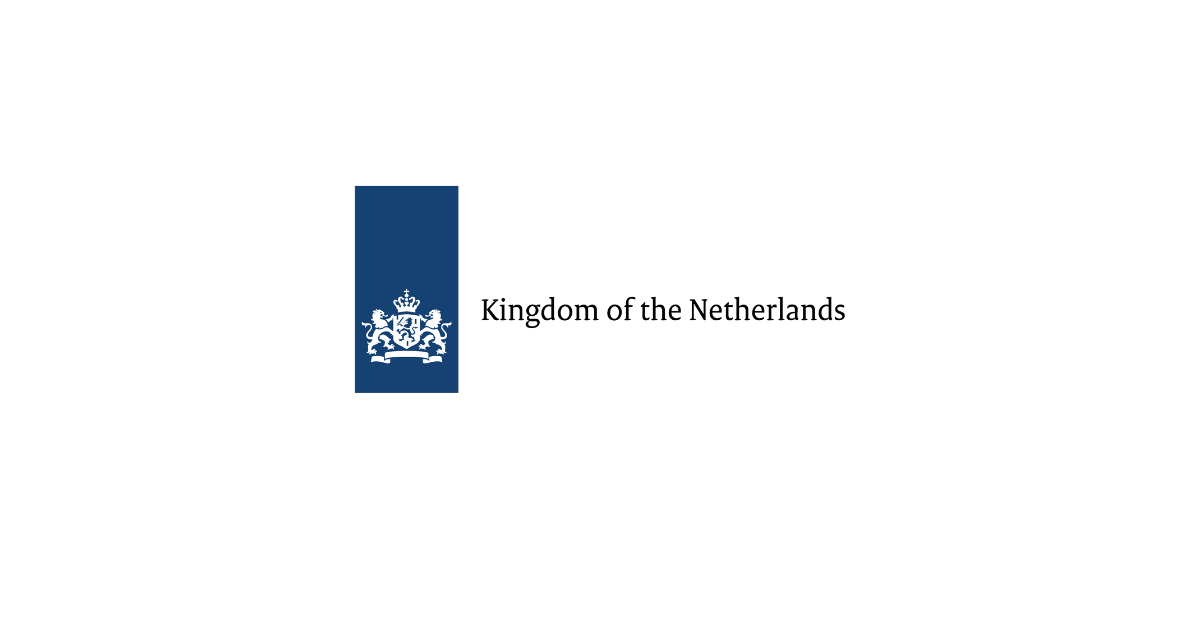