After being removed by Facebook (Meta) several times, having moved to other platforms and creating a TV channel, Alt-Info became active again on Facebook. This time, the pro-Russian group has found an easier and more stable way to reach Facebook audience, as live broadcasts from the main page of the organization „Alt-News“ are now disseminated by pages, groups and Facebook profiles associated with the Conservative Movement party. Notably, the Conservative Movement creates Facebook pages, groups, and profiles for each local organization, which makes their audience more diverse. The party began to open its municipal offices on December 27, 2021, when it opened its first office in Zugdidi, and currently reaching 18 municipalities of 5 regions of Georgia (Shida Kartli, Samtskhe-Javakheti, Kvemo Kartli, Kakheti, Samegrelo, and Zemo Svaneti). Monitoring of accessible open sources has not revealed any financial contributions in favor of the Conservative Movement. However, their offices and regional representations are growing almost on a weekly basis.

From Alt-Info to the Conservative Movement

Alt-Info is actively disseminating anti-Western, anti-liberal messages, and hate speech. As early as in 2020, ISFED said[1] that Alt-Info was using propaganda methods and disinformation campaign on social media to polarize the society. Alt-Info founders are the organizers of a violent protest against Tbilisi Pride on July 5, 2021, during which dozens of journalists were injured. Alt-Info has a close connection with Levan Vasadze, founder of public movement Eri [Nation] and Alexandr Dugin, ideologist of Kremlin’s expansionist policy, who was a guest on Alt-Info programs. According to the last report of ISFED, Alt-Info program hosts are actively disseminating messages against Georgia’s integration in Euro-Atlantic structures and suggest a direct dialogue with Russia.[2]

Alt-Info began to openly broaden its network on Facebook in June 2019, however the network was removed and banned from Facebook’s platforms in 2020[3], for a coordinated inauthentic behavior.[4] Alt-Info tried to restore its network on Facebook several times but without success. The pro-Russian group launched TV broadcasting in January 2021, and while its access to Facebook remained limited, it began to mobilize audience and disseminate messages on Telegram. According to ISFED report, Alt-Info has also migrated to TikTok and it is successfully using the platform.[5]

Alt-Info representatives had a convention on November 20 where they founded a party, Conservative Movement. Initially, the National Bureau of Public Registry suspended registration of the party due to a technical deficiency.[6] However, later on December 7, the party was officially registered.[7] Currently, the party has regional offices in 18 municipalities and their number is growing on a daily basis. According to Konstantine Morgoshia, founder of Alt-Info and the Conservative Movement party, by the end of March the number of party offices should reach 80.

Alongside opening of regional offices and using other platforms, Alt-Info became active on Facebook again. ISFED has observed the new methods, tactics, and means used by the party on the platform.

The new network of the Conservative Movement and Alt-Info

Despite the ban, on December 1, 2021, Alt-Info once again created an official page on Facebook called „Alt-News“. The page has been functioning for more than 2 months and it has over 12 thousand subscribers.[8]

It appears that Alt-Info has chosen a different, more stable way of disseminating propaganda messages in 2022. Alt-News posts and Alt-Info content are disseminated on official and regional pages of the Conservative Movement party. Alongside suspicious groups and profiles used before, Alt-Info currently prefers to use pages, personal accounts and Facebook groups created in the name of the Conservative Movement.

ISFED monitoring has revealed that so far 10 pages, 23 groups, and 14 Facebook profiles are operating under the name of the Conservative Movement on Facebook. The party is operating in 9 regions of Georgia using Facebook pages, groups, and accounts, starting from November 2021, but activating in January 2022. ISFED monitoring has revealed that Racha-Lechkhumi and Kvemo Svaneti are the only regions that have not yet been covered by the party on social media.

In parallel with an official campaign, Alt-Info continues the practice of using covert, anonymous network to deliver its messages to audience, just like in 2019-2020.

Pages associated with Alt-Info and the Conservative Movement

ISFED has found three categories of pages in the new network of Alt-Info on Facebook: pages operating in the name of Alt-Info, pages of the Conservative Party and anonymous pages.

Currently the following 3 pages are operating in the name of Alt-Info on Facebook: Alt-News, Alt-Conservator, and Alt-Info. Their official page is Alt-News, which live streams programs of the channel and has the highest engagement. The purpose of Alt-Conservator is to share their posts, while the page Alt-Info is mostly disseminating materials published on the website. Notably, Alt-Info website became unavailable when the Facebook page was removed in July 2021, however a new page was created shortly afterwards - alt-info.ge/. 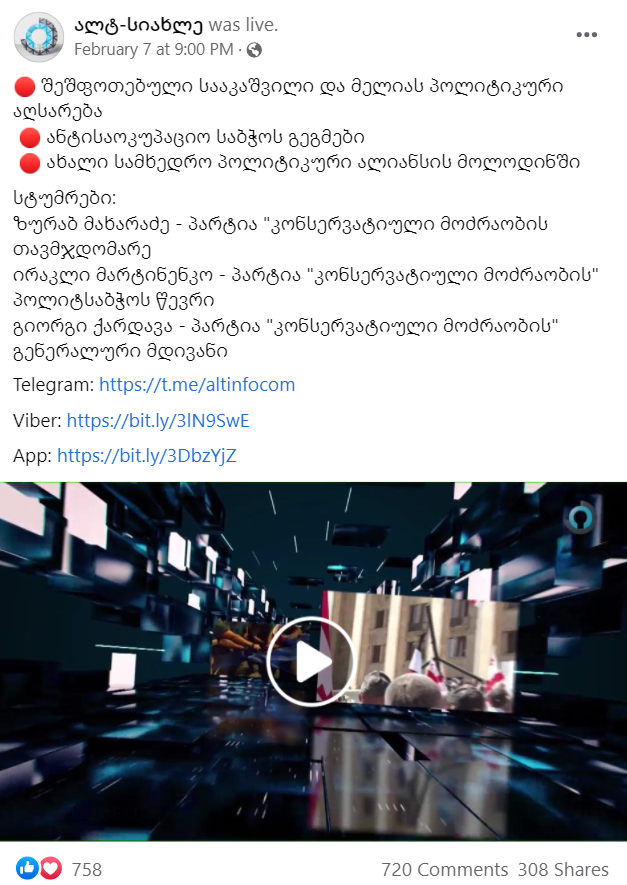 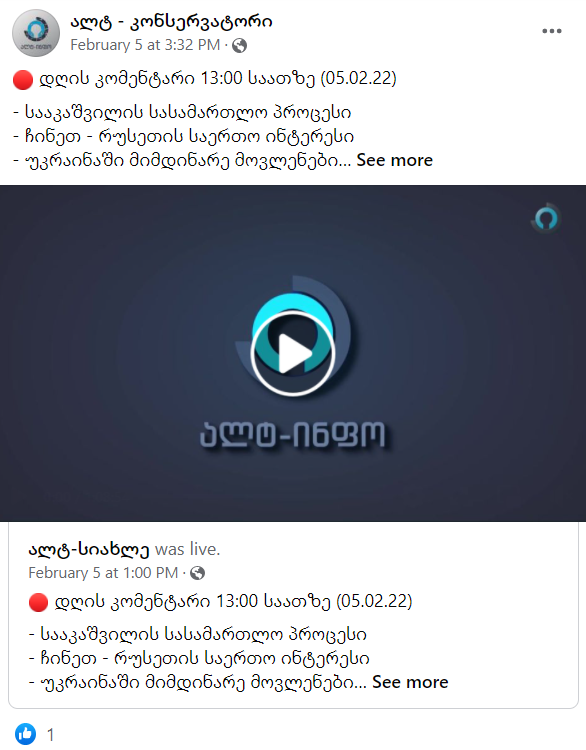 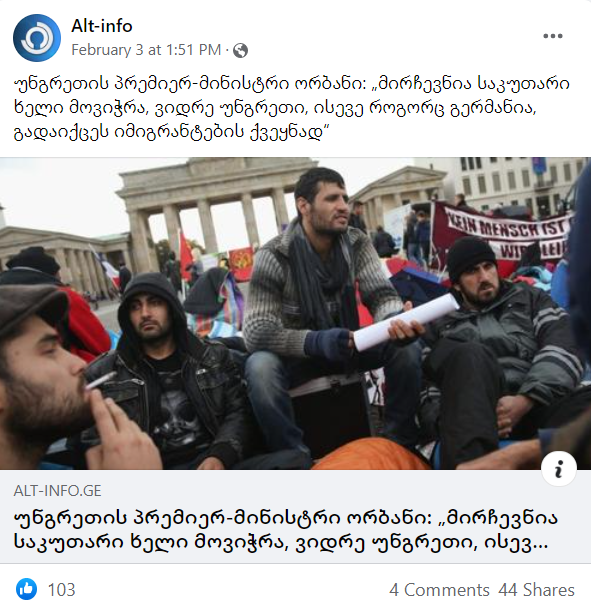 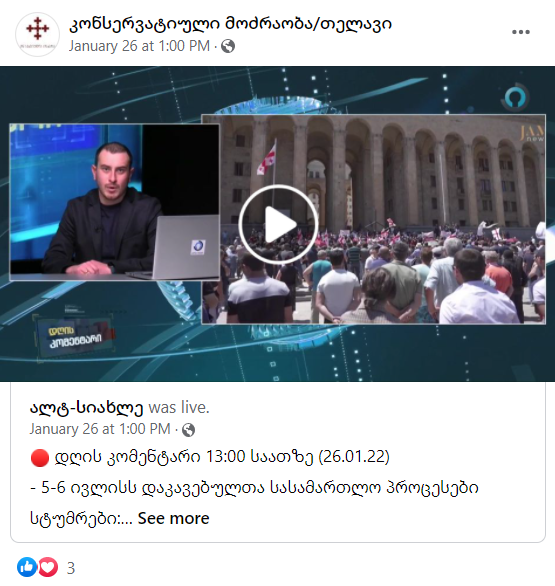 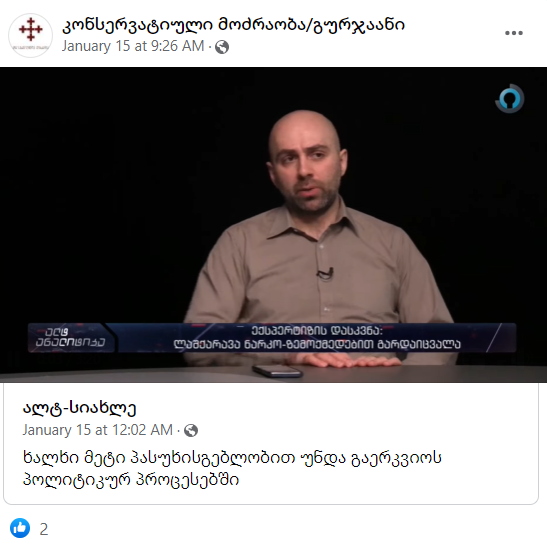 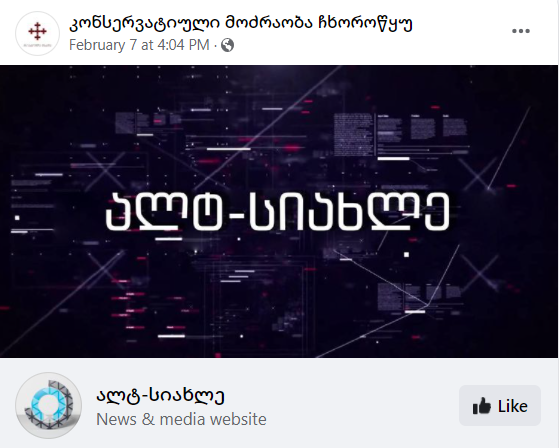 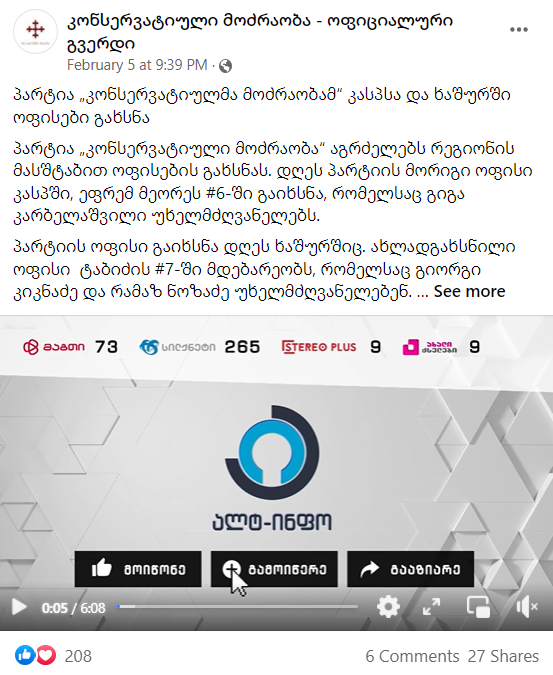 Similar to the previous practice, Alt-Info messages are also disseminated on anonymous Facebook pages. ISFED has observed that currently 4 pages affiliated with Alt-Info are operating on Facebook, which are actively disseminating their content. A page called „Conservator“ is the most active one. It posts videos cut out of Alt-Info broadcasts, creates video-collages, and publishes speeches of the party leaders. The pages are sharing Alt-News live broadcasts, website materials and content from Facebook profiles of the party leaders. They also promote Alt-Info channels on other social media platforms and disseminate news about the Conservative Movement. 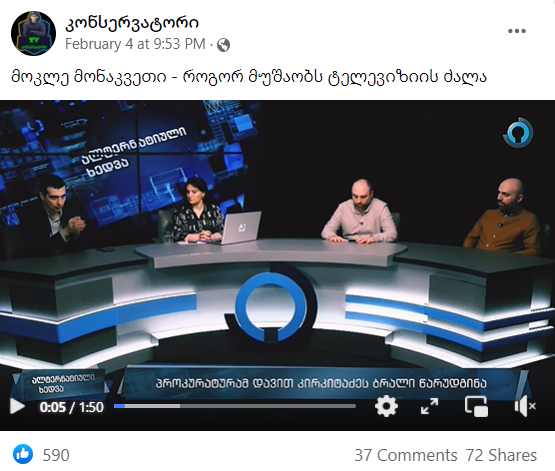 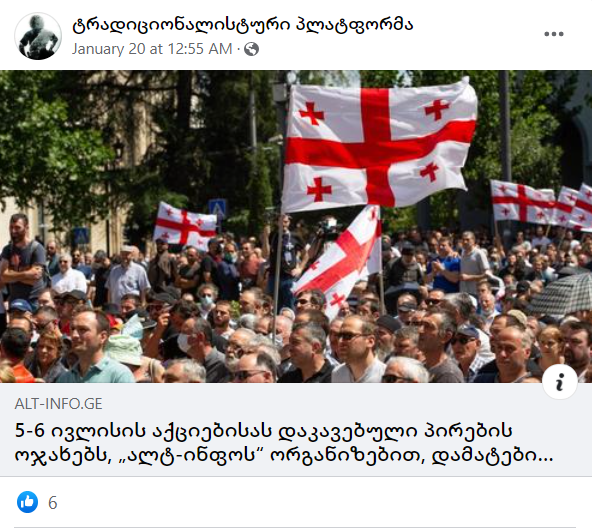 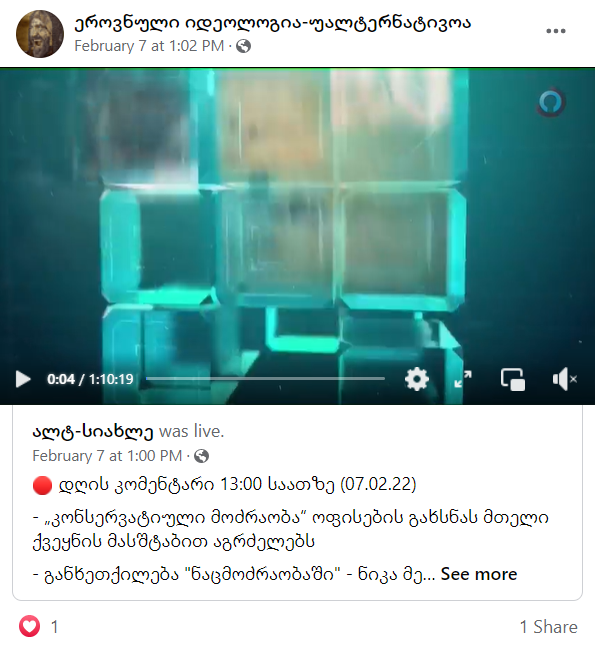 Personal profiles affiliated with Alt-Info and the Conservative Movement

ISFED has found that accounts affiliated with Alt-info are operating in a coordinated manner on Facebook. They disseminate Alt-Info materials and news about the party on their profiles and in groups. The network includes accounts operating in the name of the Conservative Movement, as well as suspicious personal Facebook profiles, some of which are hiding their identity, while others are presented with nationalistic names.

Alongside the pages, Facebook accounts were also created in the name of the Conservative Movement and they disseminate Alt-Info content. It is safe to say that this is a new and stable tactic for dissemination of Alt-Info messages. It is likely that the party has created Facebook profiles for more flexibility because this allows them to reach a wider audience in a short period of time, by intensively adding other profiles as friends.

These profiles are using similar tactics as the pages, for dissemination of Alt-Info materials. More specifically, they share live broadcasts and videos from the main Alt-Info page and from supporting and regional pages. Often, they share posts from groups that support Alt-Info. In addition, they share Alt-Info’s channels on other platforms – YouTube, Myvideo – to deliver more content to their Facebook audience. These profiles are also posting videos from Tik-Tok, where names of accounts that support Alt-Info are visible, which possibly serves the aim of promoting the latter. 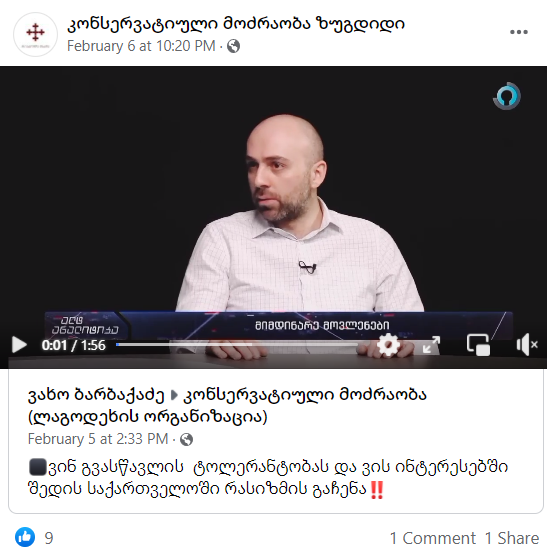 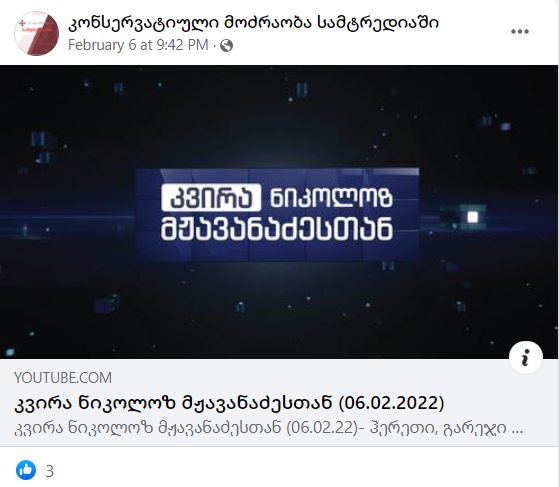 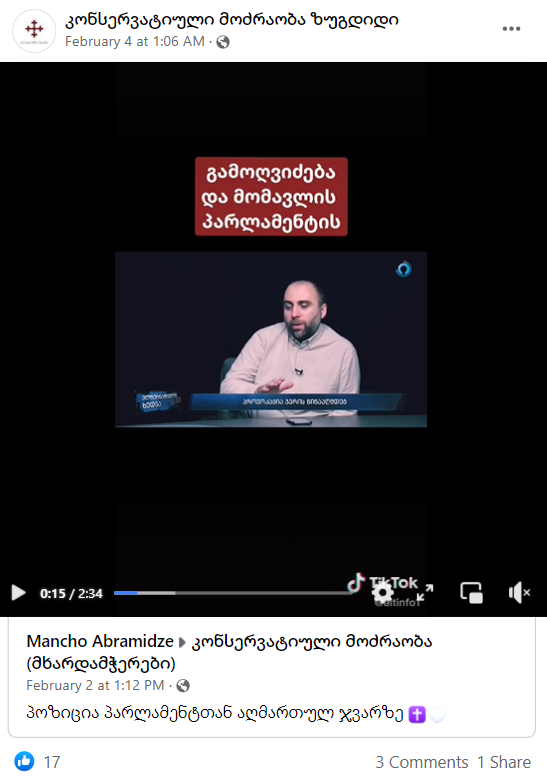 Along with the official accounts, there are also profiles on Facebook presented with names associated with the party or other nationalistic names, including: Association of Conservators, Fate of Conservators, Taliban Conservators, etc. They are disseminating Alt-Info content on their accounts. Notably, some pages disseminate materials only in groups. ISFED monitoring has revealed that some of these profiles have others among Facebook friends, suggesting that they are connected and are working together. 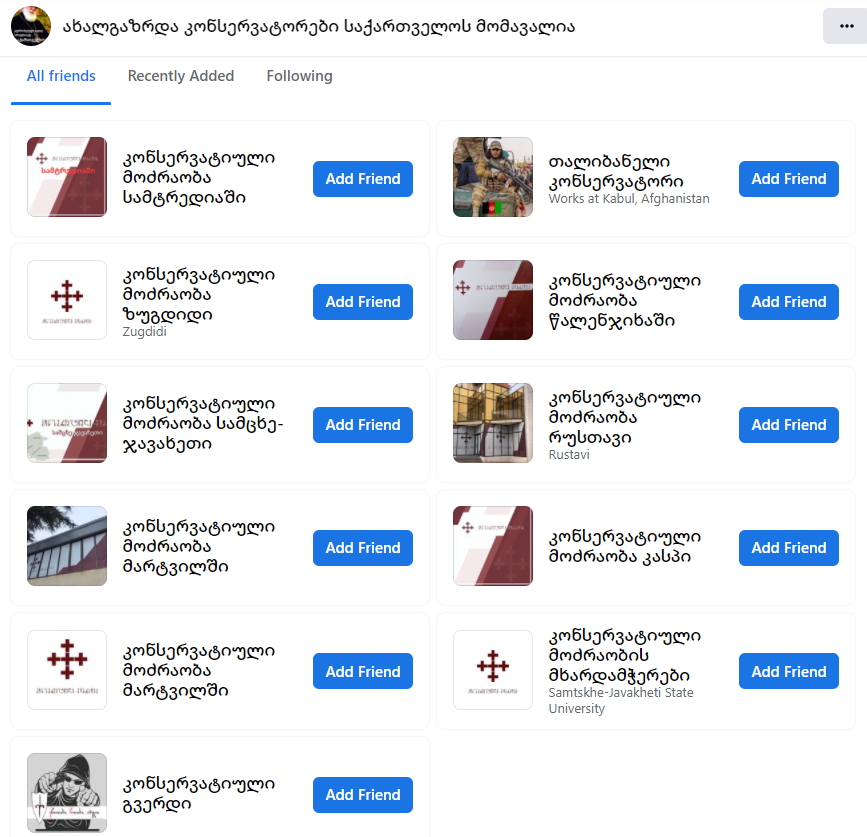 ISFED also monitored suspicious profiles that disseminate Alt-Info materials. Based on the monitoring, ISFED identified 16 inauthentic accounts that share content published on the official page on their wall and in different groups. The suspicious profiles monitored by ISFED do not use a single identifying photo and they have not filled out personal information field. Importantly, some of them have shared photos that contain symbols of Alt-Info and the Conservative Movement. 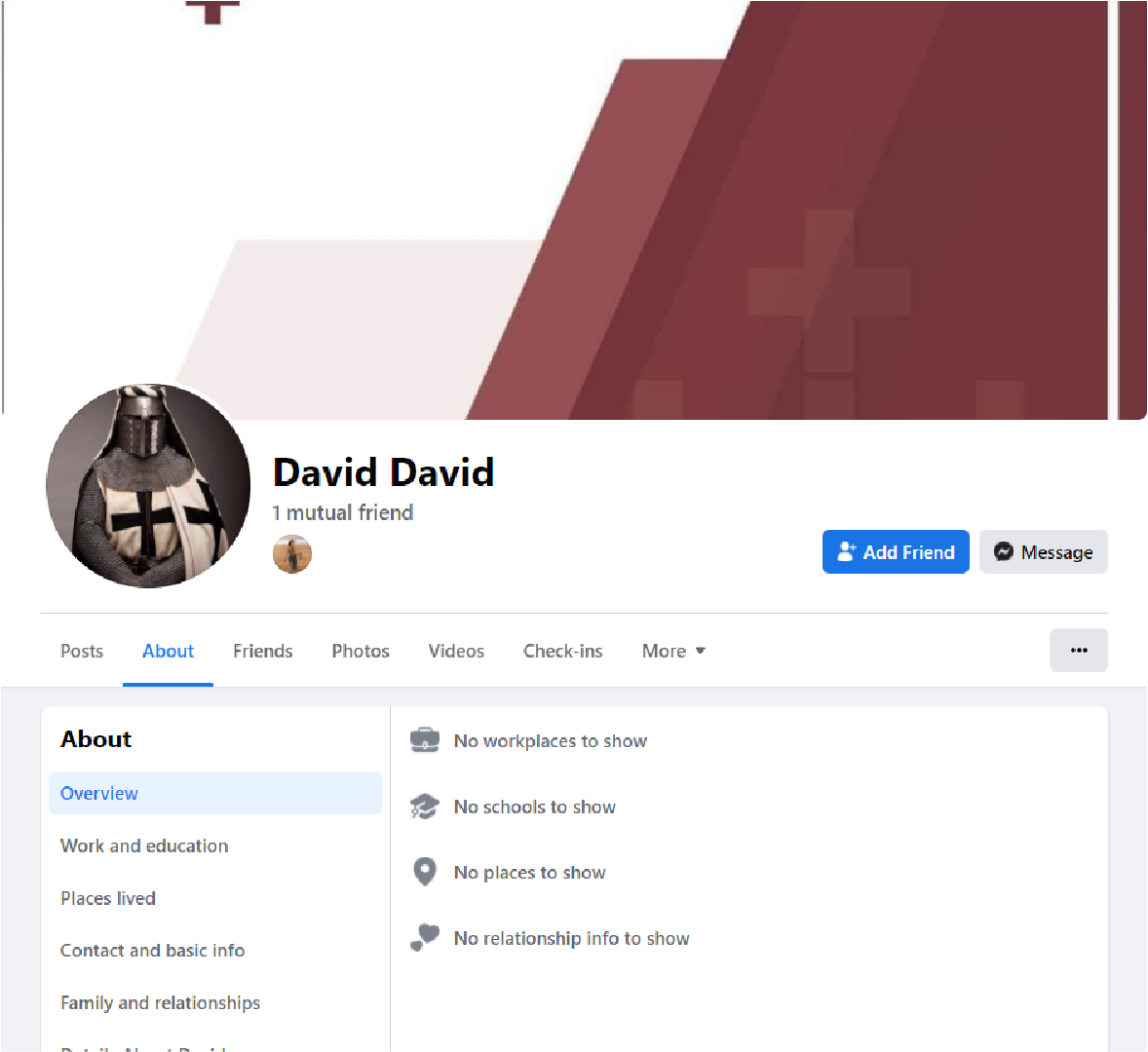 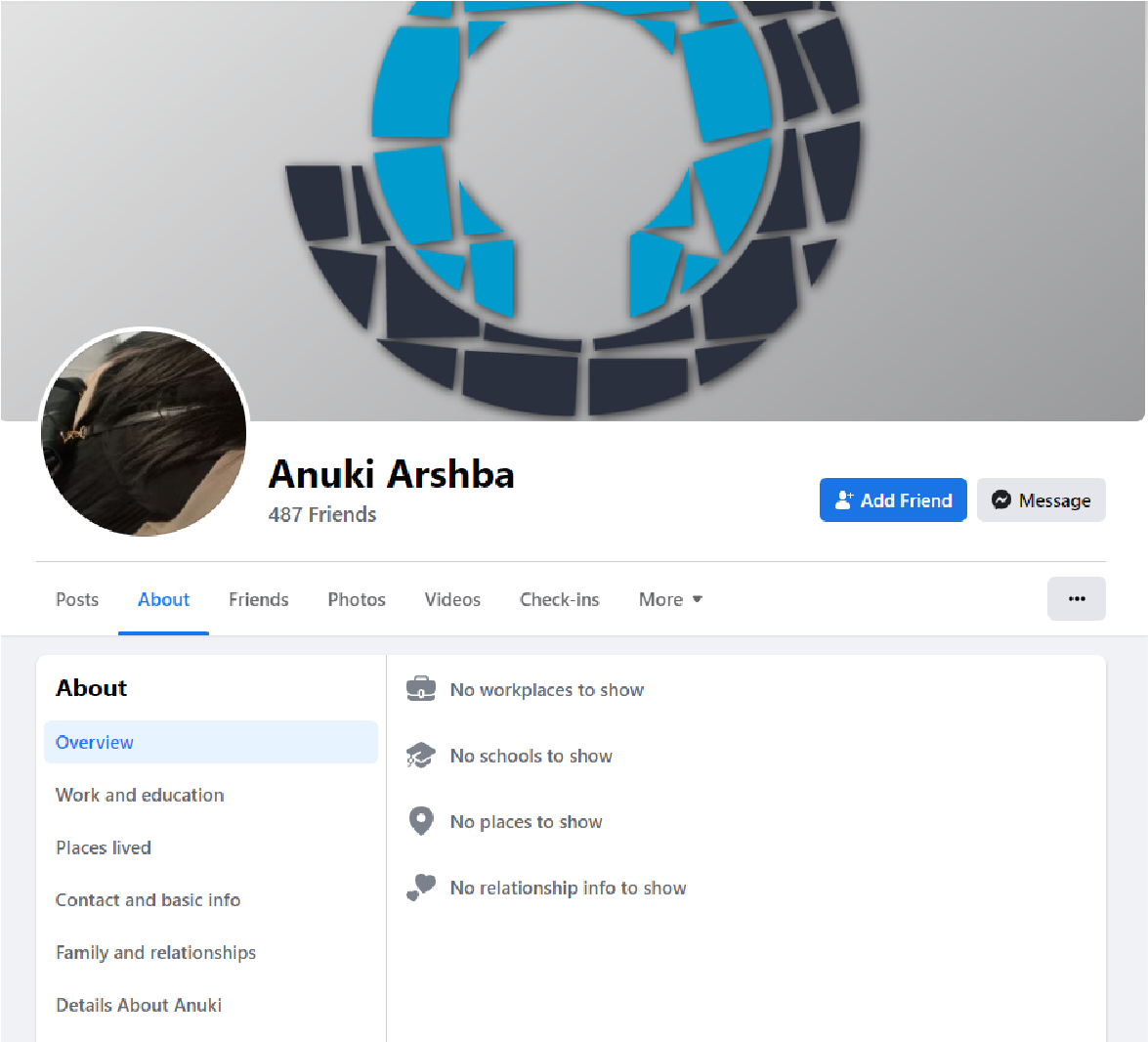 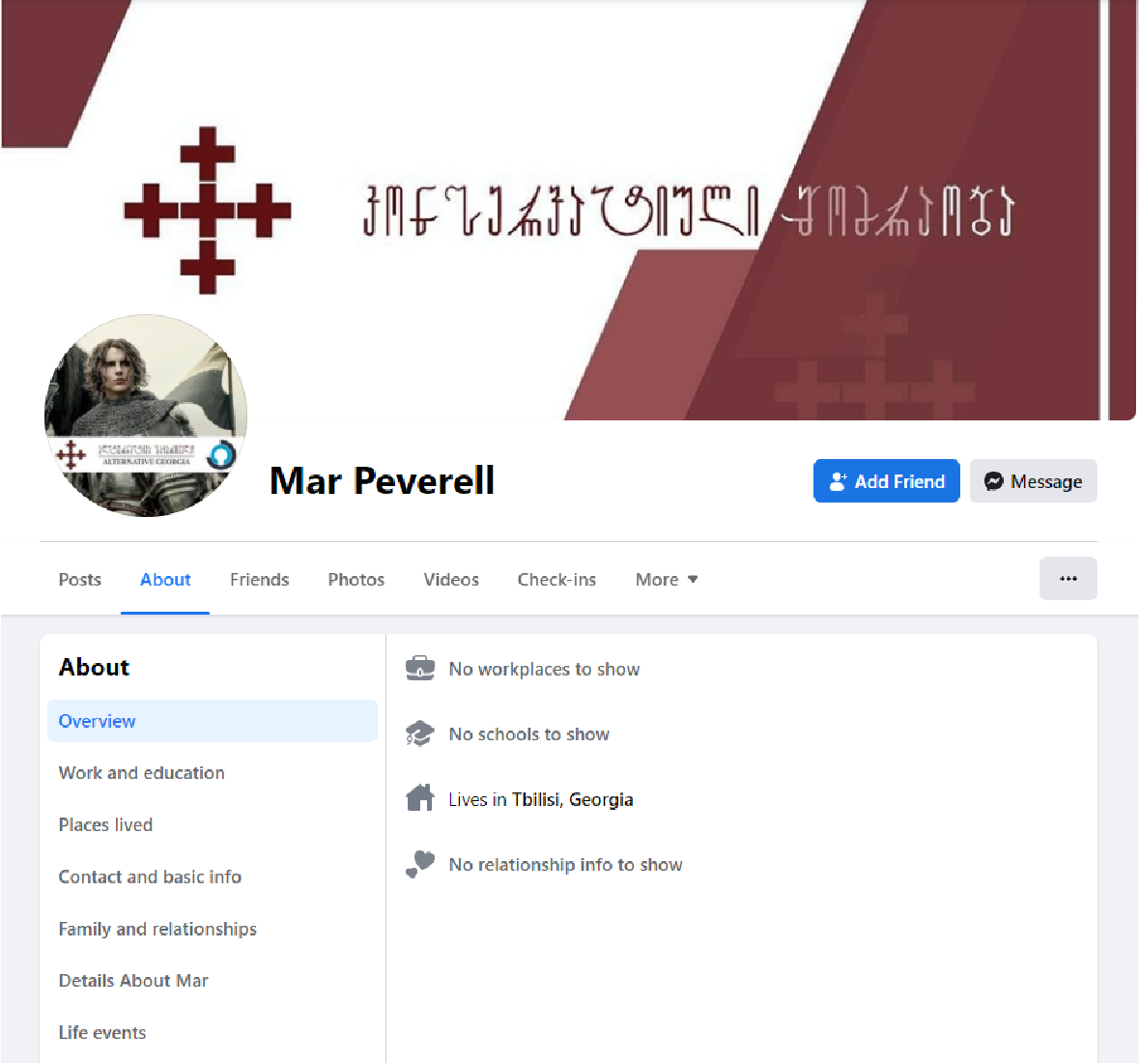 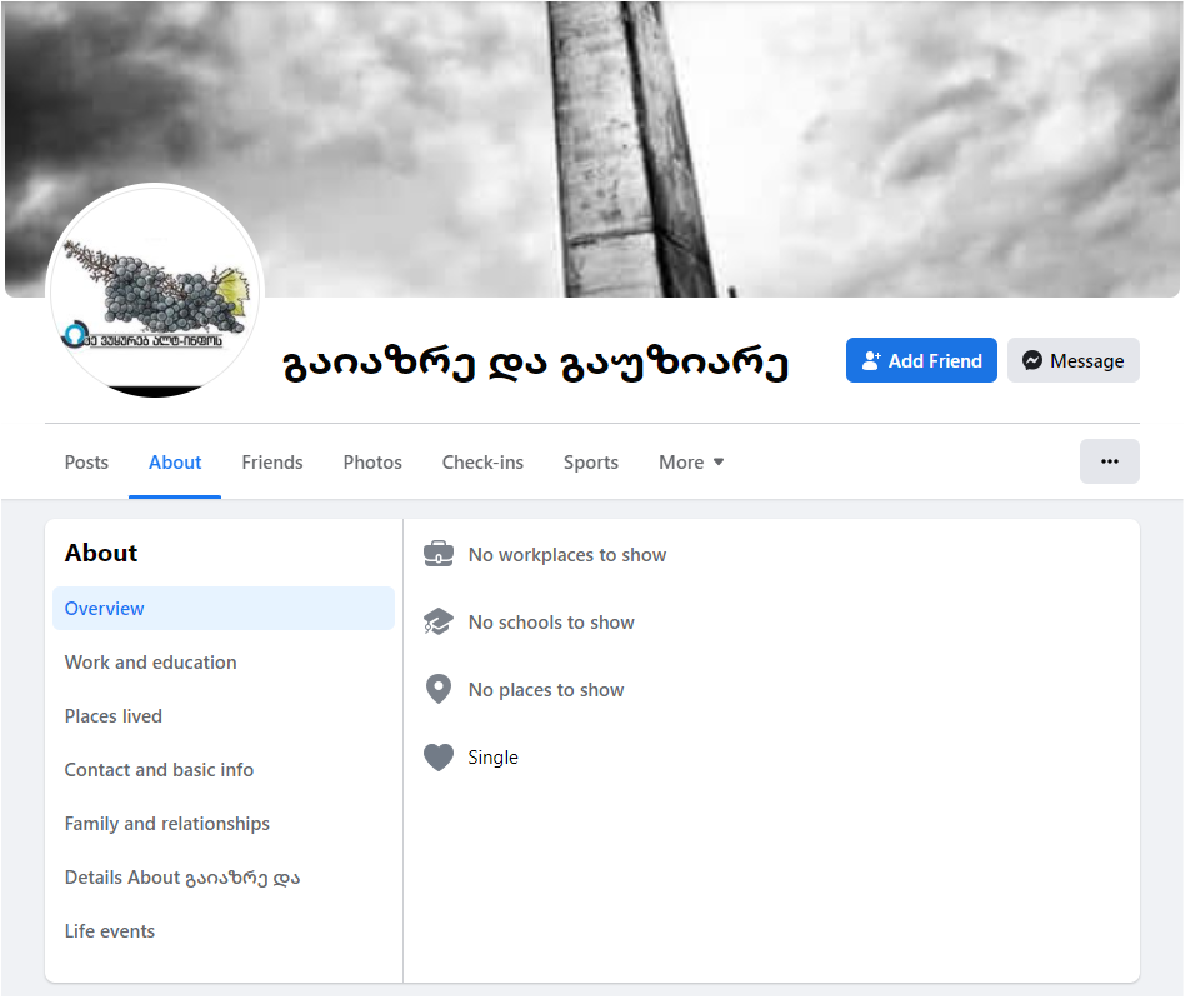 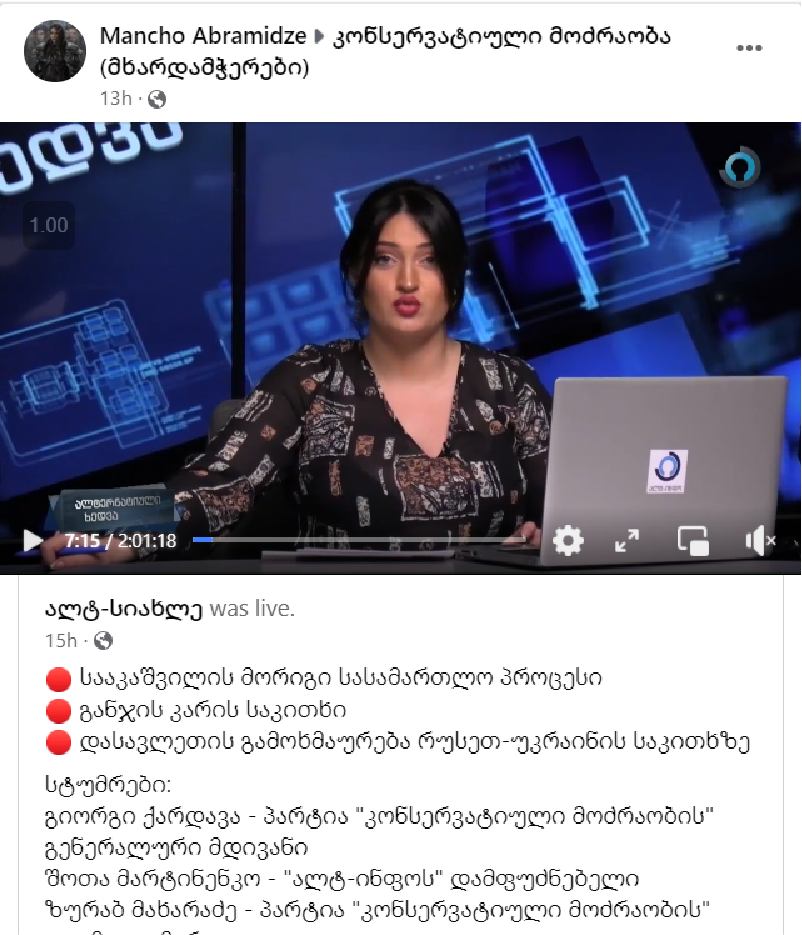 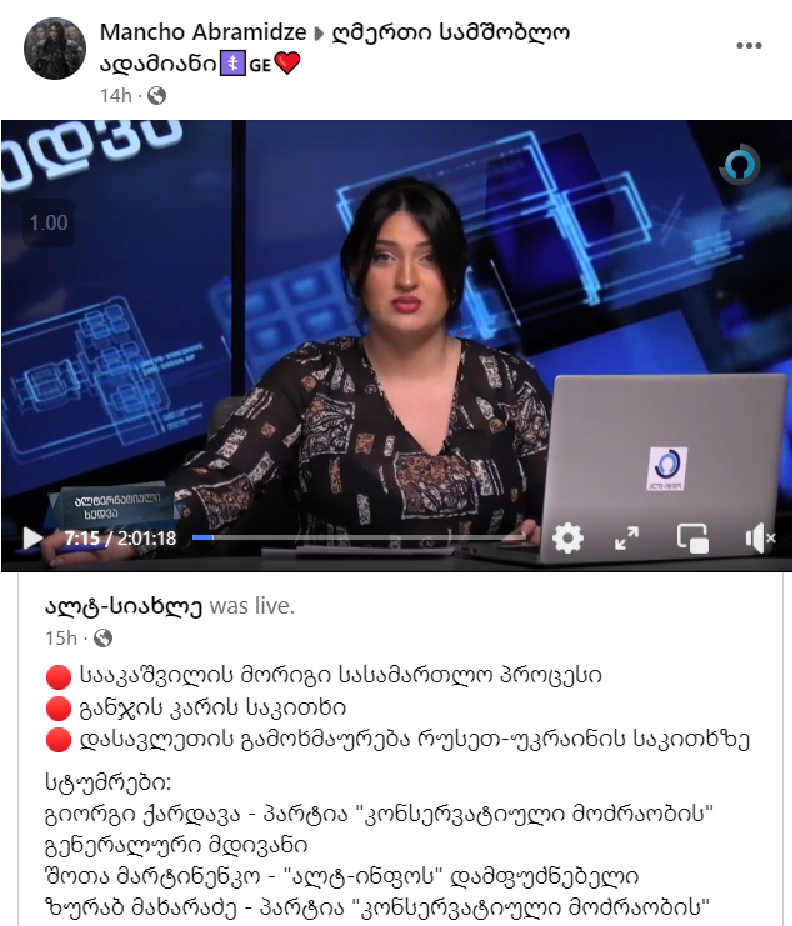 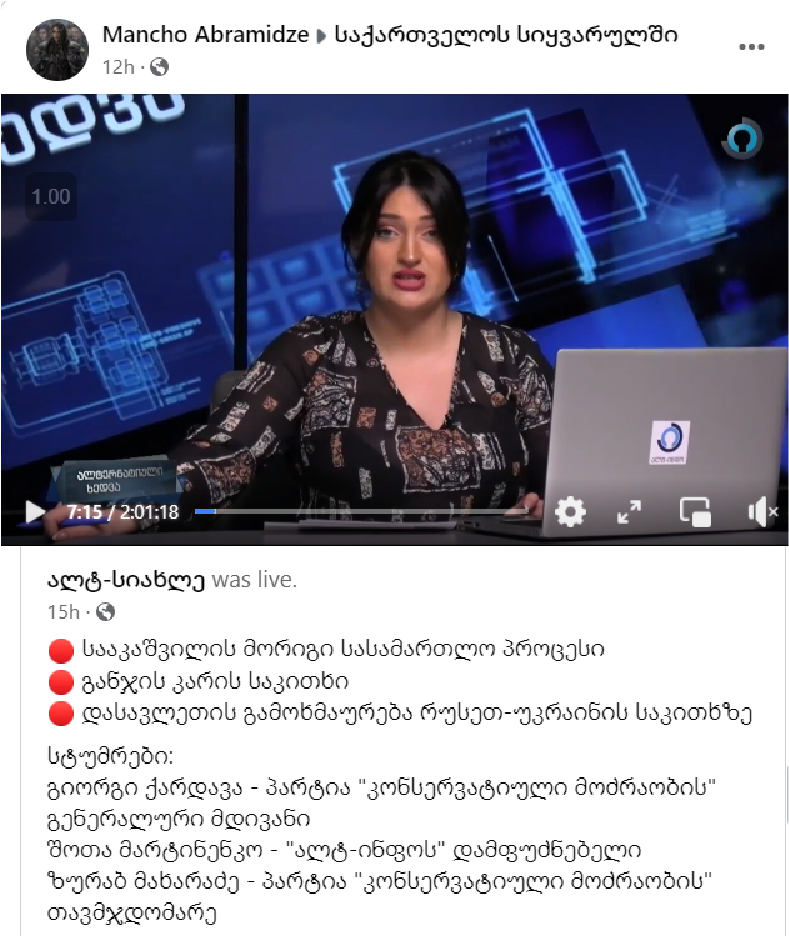 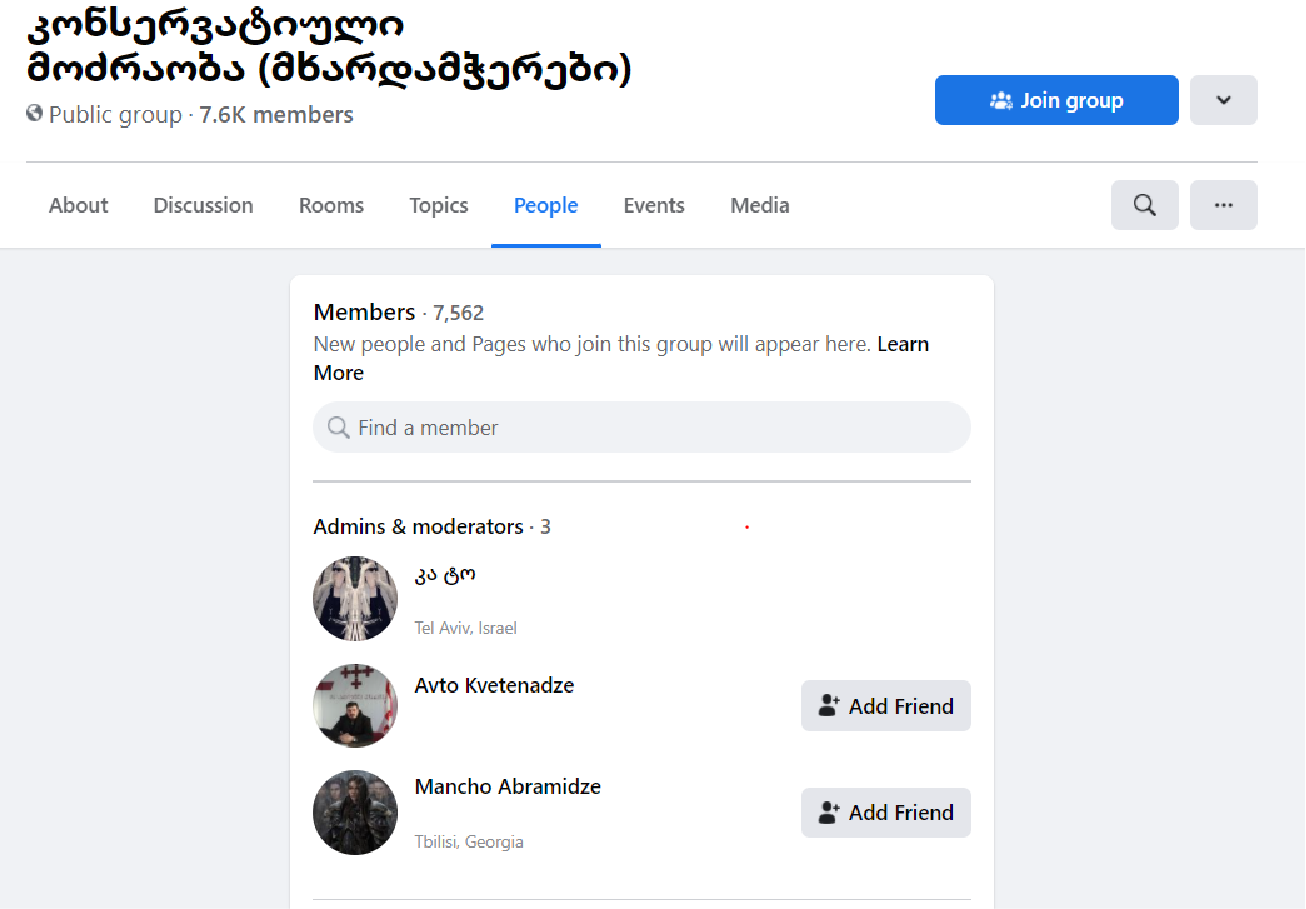 Groups associated with Alt-Info and the Conservative Movement

20 Groups operating in the name of the party and 3 groups under the name of Alt-Info are operating for dissemination of Alt-Info materials and news about the Conservative Movement. Further, for the promotion of Alt-Info and the party, a group called „GEGroupConvervativeGE” has been created and it is administered by an affiliated page called „Conservator“. Some groups share administrators/moderators, which is indicative of their coordination.

Similar to other accounts and pages, Alt-Info’s live broadcasts, videos, content from other platforms and news about the party are disseminated in these groups. Different forms of anti-Western, pro-Russian, nationalistic messages, hate speech, and messages that discredit the opposition are disseminated in the groups, alongside Alt-Info content. Together with suspicious profiles, posts in the groups are also shared by authentic accounts. It is likely that party activists are behind these accounts. 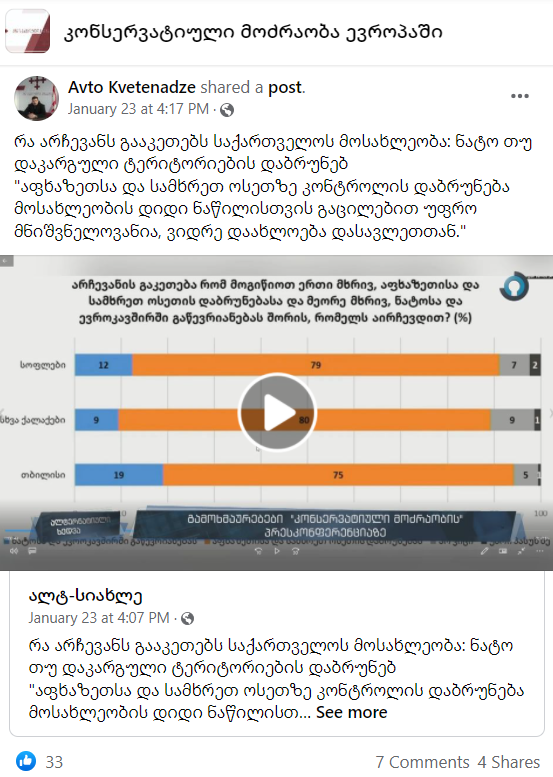 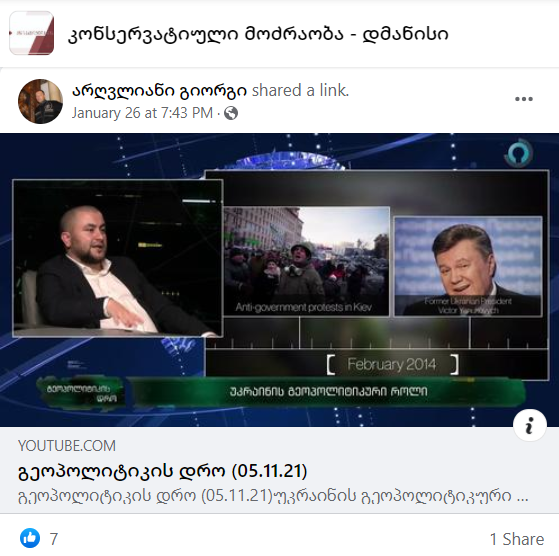 Transformation into a party not only legitimized the existence of a radical, violent, and openly pro-Russian group in the political field but also provided it with enabling environment for operation on social media. The network removed by Facebook several times is now trying to disseminate anti-Western, homophobic messages, and hate speech in the regions of Georgia under the cover of a political subject. In view of these circumstances, tactics are more diversified. Alt-Info network has now migrated to other social networking sites and platforms - TikTok, YouTube, etc. The channels that have been created there are also promoted on Facebook. Civil sector has joined forces to protect people against influences of manipulative information. However, it is also crucial for the State to study the party’s financial connections, which likely serve as an important source for moving from a virtual space into a real one.

[2] ISFED, 8 propaganda messages about the crisis in Ukraine on Facebook. https://isfed.ge/geo/blogi/8-propagandistuli-gzavnili-ukrainis-krizistan-dakavshirebit

[7] National Agency of Public Registry, Certificate of registration of a political association of citizens. https://bit.ly/3rWNohz.